By The Beatles • Official album • Part of the collection “The Beatles' U.S. Albums”

Timeline See what happened in 1966

Sessions This album has been recorded during the following sessions

And Your Bird Can Sing

If I Needed Someone

Yesterday and Today is the ninth Capitol Records album release by the Beatles and the eleventh overall American release. It was originally issued only in the United States and Canada. In the 1970s it was issued in Japan. A later UK release (on Compact Disc) followed in 2014. The album is remembered primarily for the controversy surrounding its original cover image, the “butcher cover” featuring the band dressed in white smocks and covered with decapitated baby dolls and pieces of meat. The album’s title is based on the song “Yesterday“. Early album cover proofs show the word “Yesterday” in quotes.

Yesterday and Today included tracks from the Beatles’ two most recent British LPs which had not yet been included on American albums, plus three from their upcoming LP in the United Kingdom, plus two songs which were back-to-back on a single:

The hodgepodge nature in which Capitol Records compiled their albums irritated the group, who felt they had “put a lot of work into the sequencing” of the British versions.

Released on 20 June 1966, the Yesterday and Today album’s controversial cover (see section below) marked the first time the Beatles’ judgement was criticised by the media and distributors. After advance copies were sent to disc jockeys and record reviewers, negative reaction to the cover photo was so strong Capitol recalled 750,000 copies from distributors to replace the cover. The total cost to Capitol to replace the cover and promotional materials was $250,000, wiping out their initial profit. Nevertheless, the album reached #1 on the US Billboard charts by 30 July 1966 and certified gold soon after. It stayed at number one for five weeks.

On 25 March 1966, photographer Robert Whitaker had the Beatles in the studio for a conceptual art piece titled A Somnambulant Adventure. For the shoot, Whitaker took a series of pictures of the group dressed in butcher smocks and draped with pieces of meat and body parts from plastic baby dolls. The group played along as they were tired of the usual photo shoots—Lennon recalled the band having “boredom and resentment at having to do another photo session and another Beatles thing”—and the concept was compatible with their own black humour. Although not originally intended as an album cover, the Beatles submitted photographs from the session for their promotional materials. According to a 2002 interview published in Mojo, former Capitol president Alan W. Livingston stated that it was Paul McCartney who pushed strongly for the photo’s inclusion as the album cover, and that McCartney reportedly described it as “our comment on the [Vietnam] war”. A photograph of the band smiling amid the mock carnage was used as promotional advertisements for the British release of the “Paperback Writer” single. A similar photograph from this shoot was used for the cover of the 11 June 1966 edition of the British music magazine Disc.

In the United States, Capitol Records printed approximately 750,000 copies of Yesterday and Today with the same photograph as “Paperback Writer”. They were assembled in Capitol’s four US plants situated in different cities: Los Angeles, California; Scranton, Pennsylvania; Winchester, Virginia; and Jacksonville, Illinois. Numbers designating where the covers originated were printed near the RIAA symbol on the back; for example, stereo copies from the Los Angeles plant are designated “5” and mono Los Angeles copies are marked “6”. Mono copies outnumbered stereo copies by about ten to one, making the stereo copies far more rare and valuable to collectors. A small fraction of the original covers were shipped to disc jockeys and reviewers as advance copies. Reaction was immediate, as Capitol received complaints from some dealers. The record was immediately recalled under orders from Capitol parent company EMI chairman Sir Joseph Lockwood and all copies were ordered shipped back to the record label, leading to its rarity and popularity among collectors.

At the time, some of the Beatles defended the use of the Butcher photograph. Lennon said that it was “as relevant as Vietnam” and McCartney said that their critics were “soft”. However, this opinion was not shared by all band members. George Harrison said in The Beatles Anthology that he thought the whole idea “was gross, and I also thought it was stupid. Sometimes we all did stupid things thinking it was cool and hip when it was naïve and dumb; and that was one of them.”

Capitol initially ordered plant managers to destroy the covers, and the Jacksonville plant delivered most of its copies to a landfill. However, faced with so many jackets already printed, Capitol decided instead to paste a much more conventional cover over the old ones. The new cover, featuring a picture of the band posed around an open steamer trunk, had to be trimmed on the open end by about 3 mm (1/8 inch) because the new sheet, known as a “slick”, was not placed exactly “square” on top of the original cover. Tens of thousands of these so-called “Trunk” covers were sent out. As word of this manoeuvre became known to the public, owners of the altered cover attempted, usually unsuccessfully, to peel off the pasted-over cover, hoping to reveal the original image hidden beneath. Eventually, the soaring value and desirability of unpasted-over Butcher covers spurred the development of intricate and complex techniques for peeling the Trunk cover off in such a way that only faint horizontal glue lines remained on the original cover.

Copies that have never had the white cover pasted onto them, known as “first state” covers, are very rare and command the highest prices. Copies with the pasted-on cover intact above the butcher image are known as “second state” or “pasteovers”. Today, pasteover covers that have remained unpeeled are also becoming increasingly rare and valuable; these can be identified if Ringo’s black V-neck shirt from the original cover can be seen through the paste-over to the right of the trunk lid (in alignment with the word “Today” from the album title). Covers that have had the Trunk cover removed to reveal the underlying butcher image are known as “third state” covers; these are now the most common (and least valuable, although their value varies depending on how well the cover is removed) as people continue to peel second state covers. The most valuable and highly prized first and second state Butcher Covers are those that were never opened and remain still sealed in their original shrink wrap. Since the first documented collector’s sale of a mono Butcher cover LP in 1974, which fetched US$457.00, the value of first state mono versions has consistently appreciated, reaching $20,000 in 2006.

In 1987, the former president of Capitol Records, Alan Livingston, released for sale twenty-four “first state” butcher covers from his private collection. When the original cover was scrapped in June 1966, Livingston took a case of already-sealed “Butcher” albums from the warehouse before they were to be pasted over with the new covers, and kept them in a closet at his home. These albums were first offered for sale at a Beatlefest convention at the Marriott Hotel near Los Angeles International Airport on Thanksgiving weekend 1987 by Livingston’s son. These still-sealed pristine items, which included nineteen mono and five stereo versions, are the very rarest “pedigree” specimen “Butcher Covers” in existence. These so-called “Livingston Butchers” today command premium prices among collectors, the five stereo versions being the most rare and valuable of these. In April 2006, Heritage Auction Galleries sold one of the sealed mono “Livingston Butchers” at auction in Dallas for about $39,000.

An extremely rare original “first state” stereo copy that was not from the Livingston collection was presented for appraisal at a 2003 Chicago taping of the PBS series Antiques Roadshow. It was still in the possession of the original owner, who had bought it at Sears & Roebuck on the day of release in 1966, the only day that the original Butcher cover versions were on sale before being recalled by Capitol. Although not in its original shrink-wrap, it had rarely been played and was still in excellent condition, and Roadshow appraiser Gary Sohmers valued it at US$10,000–$12,000.

In 2016, an original mint condition stereo copy of Yesterday and Today in shrink wrap was sold for a record $125,000 .

Capitol Records of Canada vice president and A&R head at the time, Paul White, kept a mono cover and a stereo cover slick for his collection.

There were no music tape versions of the Yesterday and Today “Butcher Cover”. Eight-track and reel-to-reel tapes were issued approximately one month after the vinyl album was released in 1966 and cassette tapes were not issued by Capitol Records until 1968.

Yesterday and Today received its first release on compact disc in 2014, individually and included in the Beatles boxed set titled The U.S. Albums. Mixes included on the mono/stereo 2014 CD compilation differ from the original North American LP releases:

The CD case is the “trunk” cover, but included in the CD is a sticker with the “butcher” cover.

All songs are credited to Lennon–McCartney, except where noted.

^shipments figures based on certification alone 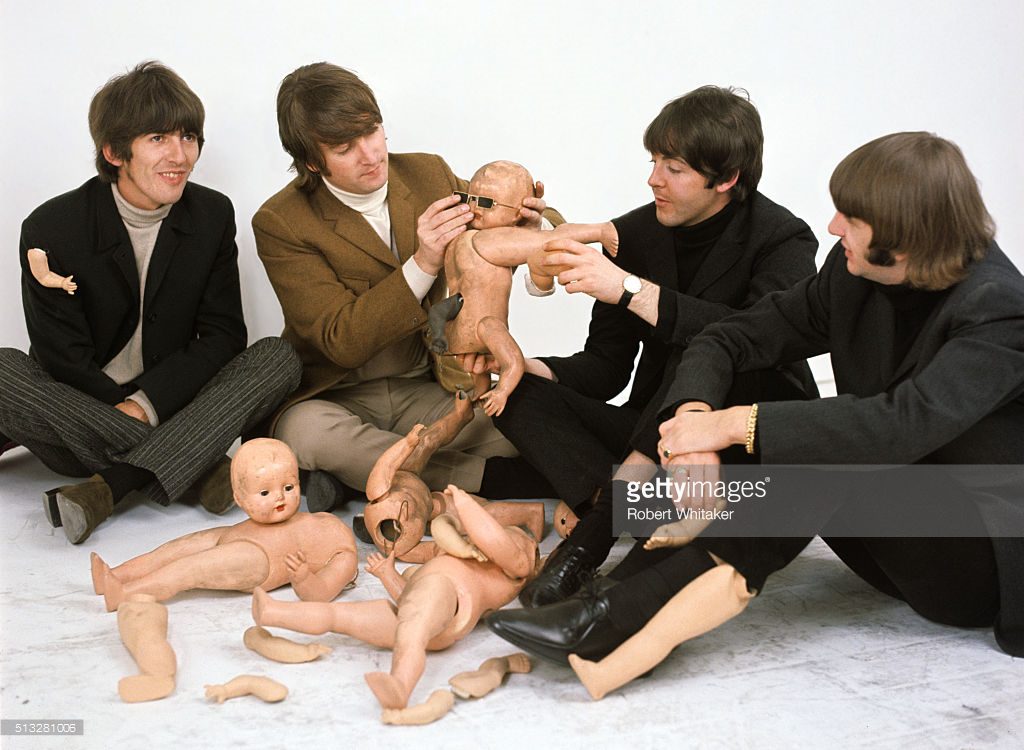 The Beatles in an outtake from the cover session for the ‘Yesterday & Today’ album, Vale Studios, Chelsea, London, 25th March 1966. L-R George Harrison, John Lennon, Paul McCartney, Ringo Starr. The ‘butcher cover’ provoked many complaints and was quickly withdrawn by the record company.