BBC Radio 4 will record a special edition of Mastertapes with Paul McCartney at the BBC Maida Vale studios on Wednesday 11 May. In this exclusive interview ahead of the release of a major retrospective collection, McCartney will talk to John Wilson about his music career and will answer questions from the audience. […]

The hour-long special edition of the programme will broadcast on BBC Radio 4 at 10am on Saturday 28 May, and a version will be filmed for BBC iPlayer.

John Wilson says: “Mastertapes looks at the nuts and bolts of songwriting, and draws back the curtain on what can often be a private and sometimes lonely art. Having interviewed McCartney many times before, I know he offers great insight into that process. As the most successful songwriter of all time, and the man behind some of my favourite music, I couldn’t ask for a better guest – it’s going to be a very special session.”

In Mastertapes, musicians and artists join presenter John Wilson to discuss their career-defining albums. Usually broadcast over two consecutive days and recorded at BBC Maida Vale studios, each edition of Mastertapes involves an in-depth interview with the artist (for the ‘A-side’), questions from the studio audience (for the ‘B-side’) and exclusive live performances of songs from the albums in question. […]

The last time Paul visited these studios was another magnificent day, the site of two intimate concerts in the space of a morning to tie in with the release of the 2013 album NEW.  Today he is here to be quizzed about songwriting and his career as a solo artist for the BBC Radio 4 series ‘Mastertapes’. In a departure from the normal format, they are devoting an hour-long special to Paul’s solo work, coinciding nicely with the forthcoming release of Pure McCartney.

John Wilson – the Mastertapes presenter – and I had been discussing this idea for a few years, but it was important to pinpoint the right moment for Paul and to ensure it could be done in a fitting way.  Years of conversations, then months of meetings and phone calls have gone into planning this with John and his team, and now the day is finally upon us. During the final preparations, Paul was playing shows in the US and I sent him emails about what would be expected of him, to which he responded: “I’ll just busk it.” Well, he is quite an extraordinary busker.

Ahead of Paul’s arrival, the show’s producer (also called Paul) tells me he’s feeling a little anxious, which doesn’t usually happen. We await our Paul’s arrival outside the studio, dodging sporadic showers along with some super-dedicated fans. Around 1pm, Paul’s car rolls up and he jumps out smartly dressed in a black suit. The reason for the sombre attire is that he has come straight from Sir George Martin’s memorial service where he has delivered an incredibly heartfelt and moving eulogy.

Inside, Paul takes a look around, happily chatting to the programme team about how things will work. Of course he is an old hand at playing Maida Vale. It is 53 years since he played the first of many sessions there with The Beatles, many of them brought together for the Live At The BBC compilation album. The studios are rich with history – they were the location for BBC News operations in the Second World War, became home to the BBC Symphony Orchestra in the 1930s and hosted decades of John Peel sessions. Around the studio today, hanging out and waiting to say hello, are Noel Gallagher and Paul Weller, both of whom ask Paul questions during the recording.

Just before we begin, a buzz sweeps the room that Brad Pitt is in our midst.  I scout around to check so I don’t misinform Paul before the interview and, sure enough, there he is. It turns out he is a friend of Weller and when he heard where his pal was going this afternoon, he didn’t want to miss out. We are accustomed to having A-listers around, but as the Daily Mirror’s reporter explains: “You don’t expect to see Brad Pitt perched on a plastic chair on a drizzly Tuesday afternoon…”

Then again, it is not every day that Paul talks about his craft in as much detail as he does today.

In the space of 90 minutes (it is being trimmed slightly before transmission), John talks to Paul about his entire career. It is a fascinating chat with loads of fascinating anecdotes and insights.  I am standing in the wings looking on and am so engrossed that it seems to be over in an instant. I can barely believe it is over so quickly. In the days to come there will be plenty of breathless excitement about the recording. 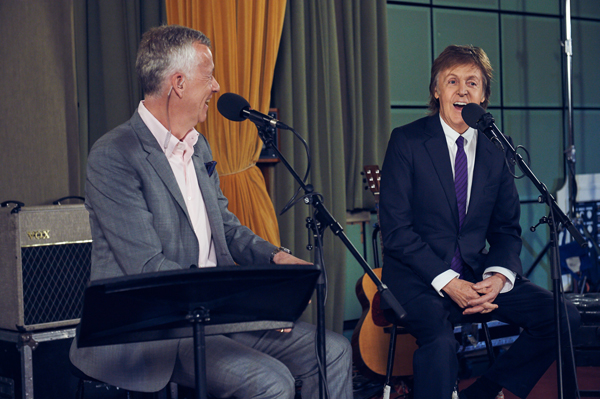 The Radio Times says of the occasion: “A rare and visible quiver of excitement ripples through the room as we take our seats and the presenter, John Wilson, introduces ‘the man who’s created the soundtrack for people around the world for successive generations and who’s one quarter of the greatest group of all time’. Brad Pitt leans sideways to get a better look. James Bay is in the row in front, near Chris Difford and Glenn Tilbrook of Squeeze, and a powerfully sun-tanned Paul Weller is about to ask a question beginning with the immortal words ‘Your Highness’.”

The Telegraph will say of the programme, which gets a clean-sweep as newspaper previewer’s ‘pick of the day’: “Mastertapes was the event of the week. McCartney was relaxed, conversational, occasionally revealing… Paul is admirably slim and limber, but his words tell more than pictures.”

A columnist from The Observer declares (taking a cue from the all-consuming EU referendum debate): “Leave? Remain? I’d rather listen to masterful Macca. I really enjoyed this programme, its atmosphere and detail, and also because McCartney clearly enjoyed it too. A gem.”

At the end of the recording session, people assemble outside Paul’s dressing room to congratulate and thank him for such an entertaining afternoon. The production team and John are on a high, explaining it has exceeded their already high expectations. A job well done by both Paul and the Mastertapes team (you may still be able to catch it on the BBC iPlayer if you live in the UK).

Mastertapes is in the can and Paul has to head home and pack for his week in Argentina. But let me hand over to John Wilson for his thoughts on the Mastertapes session:

“Despite having made around 30 previous episodes of Mastertapes, and having interviewed Paul many times over the years, I was pretty nervous. There was a lot riding on the show, as Radio 4 had commissioned it as an hour-long special edition, plus it was being filmed, so we had to get it right! But nerves are good, they focus the mind.

“In a way I’ve been preparing for this programme all my life as I’m a massive fan, and he was always my favourite Beatle as a kid! In the week before the show I re-read Barry Miles’s biography of Paul and read the new Philip Norman book, as well as creating a playlist for my phone. I mapped out a route through the interview, starting with the first solo album, using key songs as conversation markers. I knew it would be unlikely we’d get new, untold stories from Paul – he’s done so many interviews over the years – but I hoped that by keeping it fast, probing and conversational we might get a fresh perspective during the hour.

“Brad Pitt was shooting a film round the corner and the first I heard about him coming was when I got a text from Paul Weller saying ‘can Brad Pitt have a plus-one?’.  I thought it was a wind-up, obviously, but just before we started recording, he turned up in a Second World War greatcoat and slicked-back hair, straight from the set. I was waiting to go into the studio and said, ‘Ah, just in time, take your seat please sir’. Two minutes later he was grinning at me from row two, probably the weirdest thing that’s happened during a Mastertapes recording.

“Having met Paul many times over the years, I wasn’t too fazed, although when he started doing ‘Every Night’ I did think, ‘wow, McCartney himself is showing me how to play that tricky Emaj7 chord’.
Hearing him talk about John Lennon was very moving, especially when he played a bit of ‘Here Today’.  And Noel Gallagher asked a question – supplied by Paul’s daughters Stella and Mary, asking which of them is his favourite – which was hilarious.

“We’ve had some great sessions but this has got to be the best of the lot – the atmosphere was electric in the room, it was a very special afternoon. I would like to say that Paul and I jammed backstage for a bit to wind down, then went on to a Soho speakeasy, but that wouldn’t be quite true. For me, it was probably red wine and Springwatch that evening.

“Afterwards I got a lovely email from Paul. I was very touched, but mainly I was just very happy that he enjoyed it so much. As he said in his email, ‘it was a bit of a laugh’!”

Paul: Mastertapes, that was a fun thing to do. I got a lot of feedback off that. I think people who normally wouldn’t listen because it was Radio 4, so you get a different type of listener. I listen to Radio 4 a lot in the car. And it was good having Paul Weller and Noel Gallagher in the audience sitting with Brad Pitt, Simon Pegg. That was fun, just getting feedback off them. John Wilson, he’s a good interviewer. And he does his homework, so he asks pretty interesting questions, he keeps you interested as the interviewee. You don’t kind of go, “Oh God, I wish this would be finished!” It’s like, “Oh yeah, this is good”. I enjoyed that and I liked Noel’s question: “Which is your favourite daughter, Mary or Stella?” Oh, you can’t ask me that! It’s funny because, what did he say? He said, “Stella will say you’ll say Mary, and Mary agreed”. But no, he knew what I normally say like, “Come on, they’re all equal!” 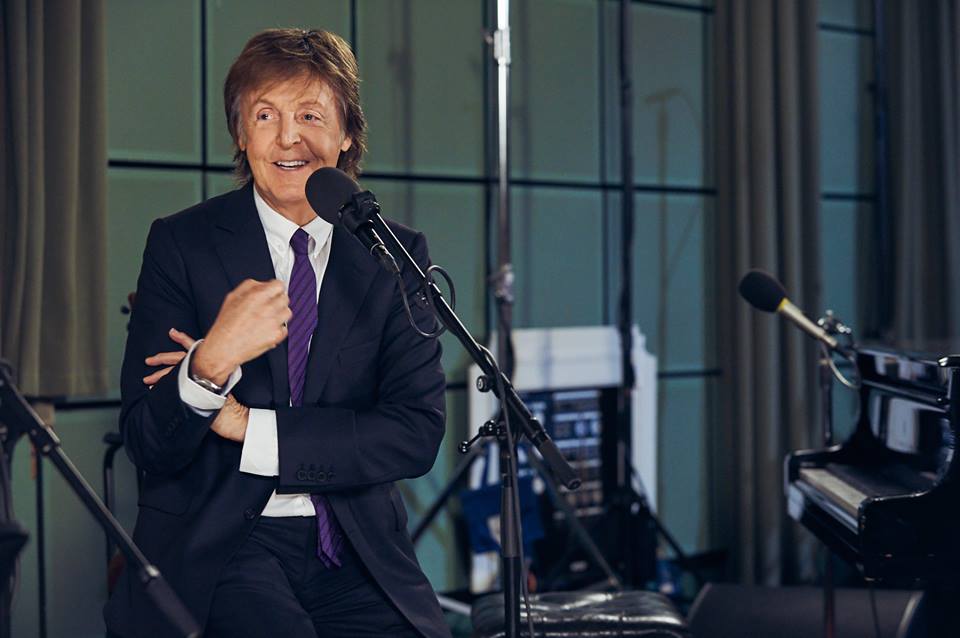 This was the 3rd concert played at BBC Maida Vale Studios.