All Those Years Ago

Recording and mixing "All Together Now"

Mixing "Hey Bulldog", "All Together Now", "All You Need Is Love", "Only A Northern Song"

The Beatles film their cameo appearance for “Yellow Submarine” film

When they (the Music Hall performers) were singing a song, to encourage the audience to join in, they’d say, ‘All together now,’ so I just took it and read another meaning into it, of we are all together now. So, I used the dual meaning. It’s really a children’s song.

Paul McCartney – Quoted in “The Beatles: Off the Record” by Keith Badman

“All Together Now” is a song by the English rock band the Beatles written primarily by Paul McCartney and credited to the Lennon–McCartney partnership. The song was recorded during the band’s Magical Mystery Tour period, but remained unreleased until it was included on the Yellow Submarine soundtrack. It was released as a single in 1972 in European countries such as France and Germany, backed by “Hey Bulldog.”

McCartney described the song as a children’s sing-along with the title phrase inspired by the music hall tradition of asking the audience to join in. He also described a “subcurrent” in the song, a dual-meaning where “we are all together now.” According to music critic Tom Maginnis of AllMusic, McCartney created the song “to match the same light-hearted spirit” of “Yellow Submarine“.

The track was recorded on 12 May 1967 at EMI Studios and mixed the same day, but was not released until 13 January 1969, when it appeared on the soundtrack album. George Martin was absent from this session, leaving recording engineer Geoff Emerick in charge of the control room. The song took less than six hours to record and was recorded in nine takes, the last of which was selected for overdubs.

Mark Lewisohn reported that the “party-style” backing vocals were provided by “whoever happened to be around”.

“All Together Now” appears in an animated sequence in the film Yellow Submarine, and is also introduced by the Beatles themselves in a final live-action scene of the film. During the latter scene, translations of “All Together Now” into various languages appear written on-screen.

Paul McCartney performed the song live for the first time by any Beatle on 4 May 2013 at the Estádio Mineirão, Belo Horizonte, Brazil. He subsequently played it throughout his 2013–15 Out There tour. […]

It’s really a children’s song. I had a few young relatives and I would sing songs for them. I used to do a song for kids called Jumping Round The Room, very similar to All Together Now, and then it would be ‘lying on your backs’, all the kids would have to lie down, then it would be ‘skipping round the room’, ‘jumping in the air’. It’s a play away command song for children. It would be in G, very very simple chords, only a couple of chords, so that’s what this is. There’s a little subcurrent to it but it’s just a singalong really. A bit of a throwaway.

A mono mix made 12 May 1967 was used only in the original Yellow Submarine film print.

See all bootlegs containing “All Together Now” 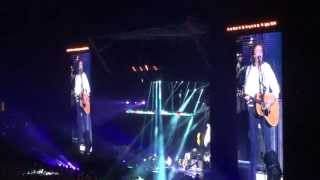 “All Together Now” has been played in 90 concerts and 1 soundchecks.

Latest concerts where All Together Now has been played

See all concerts where “All Together Now” has been played