Rehearsals for "On The Run" tour

“Birthday” is a song by the English rock band the Beatles from their 1968 double album The Beatles (also known as “the White Album”). Written by John Lennon and Paul McCartney, it is the opening track on the third side of the LP (or the second disc in CD versions of the record). Surviving Beatles Paul McCartney and Ringo Starr performed it for Starr’s 70th birthday at Radio City Music Hall on 7 July 2010.

The song was largely written during a recording session at EMI Studios on 18 September 1968 by John Lennon and Paul McCartney. McCartney: “We thought, ‘Why not make something up?’ So we got a riff going and arranged it around this riff. So that is 50–50 John and me, made up on the spot and recorded all in the same evening.” During the session, the Beatles and the recording crew made a short trip around the corner to McCartney’s house to watch the 1956 rock & roll movie The Girl Can’t Help It which was being shown for the first time on British television. After the movie they returned to record “Birthday”.

George Martin was away so his assistant Chris Thomas produced the session. His memory is that the song was mostly McCartney’s: “Paul was the first one in, and he was playing the ‘Birthday’ riff. Eventually the others arrived, by which time Paul had literally written the song, right there in the studio.” Everyone in the studio sang in the chorus and it was 5 am by the time the final mono mix was completed.

Lennon said in his Playboy interview in 1980: “‘Birthday’ was written in the studio. Just made up on the spot. I think Paul wanted to write a song like ‘Happy Birthday Baby’, the old fifties hit. But it was sort of made up in the studio. It was a piece of garbage.”

“Birthday” begins with an intro drum fill, then moves directly into a blues progression in A (in the form of a guitar riff doubled by the bass) with McCartney singing at the top of his chest voice with Lennon on a lower harmony. After this section, a drum break lasting eight measures brings the song into the middle section, which rests entirely on the dominant. A repeat of the blues progression/guitar riff instrumental section, augmented by piano brings the song into a bridge before returning to a repeat of the first vocal section, this time with the piano accompaniment. […]

Paul McCartney released a live version on 8 October 1990 in the UK, with a US release albeit only as a cassette on 16 October. Originally appearing on Tripping the Live Fantastic, the single reached number 29 on the UK Singles Chart and number 3 in Italy. The B-side was a live version of “Good Day Sunshine“. McCartney also released a 12” single and CD single with those songs and two more live tracks, “P.S. Love Me Do” and “Let ‘Em In“. “P.S. Love Me Do” is a combination of “P.S. I Love You” and “Love Me Do“. […]

We thought, ‘Why not make something up?’ So we got a riff going and arranged it around this riff. We said, ‘We’ll go to there for a few bars, then we’ll do this for a few bars.’ We added some lyrics, then we got the friends who were there to join in on the chorus. So that is 50-50 John and me, made up on the spot and recorded all on the same evening. I don’t recall it being anybody’s birthday in particular but it might have been, but the other reason for doing it is that, if you have a song that refers to Christmas or a birthday, it adds to the life of the song, if it’s a good song, because people will pull it out on birthday shows, so I think there was a little bit of that at the back of our minds.

There’s a story about that. What happened was ‘The Girl Can’t Help It’ was on television. That’s an old rock film with Little Richard and Fats Domino and Eddie Cochran and a few others… Gene Vincent. And we wanted to see it, so we started recording at five o’clock. And we said, ‘We’ll do something, just do a backing track. We’ll make up a backing track.’ So we kept it very simple– twelve-bar blues kind of thing. And we stuck in a few bits here and there in it, with no idea what the song was or what was gonna go on top of it. We just said, ‘Okay. Twelve bars in A, and we’ll change to D, and I’m gonna do a few beats in C.’ And we really just did it like that… random thing. We didn’t have time for anything else, and so we just recorded this backing. And we came back here to my house and watched ‘The Girl Can’t Help It.’ Then we went back to the studio again and made up some words to go with it all. So this song was just made up in an evening. Umm, you know. We hadn’t ever thought of it before then. And it’s one of my favorites because of that. I think it works, you know, ‘cuz it’s just… It’s a good one to dance to. Like the big long drum break, just ‘cuz, instead of… well, normally we might have four bars of drums, but with this we just keep it going, you know. We all like to hear drums plodding on.

“The Girl Can’t Help It” is a 1956 American musical comedy film. The production was originally intended as a vehicle for the American sex symbol Jayne Mansfield, with a satirical subplot involving teenagers and rock ‘n’ roll music. The unintended result has been called the “most potent” celebration of rock music ever captured on film. From Wikipedia:

The film’s influence on rock music is significant. The film reached Liverpool, England, in the early summer of 1957. The cameo performances of early rock ‘n’ roll stars such as Little Richard, Eddie Cochran, and Gene Vincent and His Bluecaps fascinated a 16-year-old John Lennon by showing him, for the first time, his “worshipped” American rock ‘n’ roll stars as living humans and thus further inspiring him to pursue his own rock ‘n’ roll dream. On July 6, 1957, 15-year-old Paul McCartney was introduced to Lennon after the latter had performed at a village church garden party with his skiffle group The Quarrymen. McCartney demonstrated his musical prowess to Lennon by performing “Twenty Flight Rock” in a manner similar to how he had seen it played by Eddie Cochran in The Girl Can’t Help It. This led to Lennon inviting McCartney to join the group.

We’d loved “The Girl Can’t Help It” and we knew that you could make a rock’n’roll film. We’d seen those little American productions and, although they were low budget and not very good, they did have music and we always went to see them.

Paul McCartney, mentioning the film “The Girl Can’t Help It” – From The Beatles Anthology book

The last “daaaance” starts twice, maybe a double-track error or a leak from a guide vocal, as heard on stereo [b], but covered up by other sound in [a]. 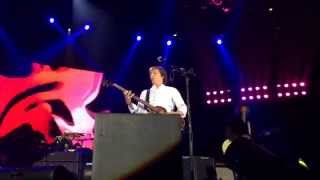 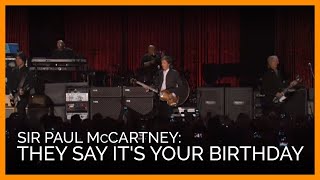 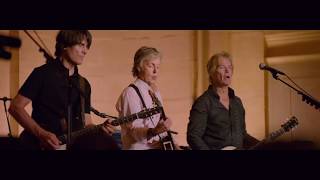 “Birthday” has been played in 155 concerts and 27 soundchecks.

Latest concerts where Birthday has been played

See all concerts where “Birthday” has been played