The song was recorded late in 1974 at Abbey Road Studios, before the band went to New Orleans to record the bulk of Venus and Mars. It was one of only three songs recorded with short-term Wings’ drummer Geoff Britton before Britton quit the band (the others being “Love in Song” and “Medicine Jar“).

Like many of Paul McCartney’s songs of this period, the subject of “Letting Go” is his wife Linda. The singer describes himself in a relationship with a beautiful woman but he remains concerned about the relationship. McCartney biographer Peter Ames Carlin claims that the song “traced the thin line between love and obsession”, with “passion in all its unhinged, dangerous glory.” The song reflects McCartney’s recognition that he needed to give his wife more space to pursue her own interests, after Linda had given up her career as a photographer to join his band. The content of the lyrics varies between the verses and refrain, with the verses describing the subject and the refrain acknowledging the idea of “letting go.” The key is A minor at the start of the song, but the song ends in C minor.

The contrast in the lyrics is also reflected in the music, with the refrain using a descending note melody and having a darker sound than the verses, which have a melody that wavers up and down. The song uses a medium tempo, and the instruments include a guitar part described by Allmusic critic Donald Guarisco as “bluesy” and keyboards, plus a horn parts in an interlude as well as in the outro. “Letting Go” has more of a soul music feel than most of the songs on Venus and Mars, which are more pop music oriented. The single version is remixed and is approximately a minute shorter than the album track. The single also incorporates elements that were not included on the album track, such as an organ glissando at the beginning.

Authors Chip Madinger and Mark Easter called “Letting Go” “one of the best songs on the LP.” Robert Rodriguez called it “a strong track topped with a full slab of brass” and noted that it was “one of the Wings’ onstage highlights.”[10] Authors Roy Carr and Tony Tyler described the song as one of the few “genuinely potent” tracks on Venus and Mars but with respect to the single declare that McCartney “should have taken his advice and let go. This seeks to be composedly heavy but merely succeeds in attaining a considerable degree of ponderosity.”[11] In the book The Rough Guide to the Beatles, Chris Ingham considered “Letting Go” to be “an inert sludge rocker,” calling it “a disastrous choice for a single.”[12]

The song was performed during the Wings over America tour in 1976, and was included on the live album Wings over America and on the concert film, Rockshow.[13][14] Larry Rohter of The Washington Post described the performance on Wings Over America as “rollicking” and “exciting.”[15] Ben Fong-Torres described McCartney’s live performance of the song as “reaching back for some of that Little Richard inspiration.”[16] McCartney played it again during his 2010 Up and Coming Tour.

“Letting Go” has been covered by Ian Mitchell on the album Garage Band Tribute To the Beatles.[17][18]

https://www.spin.com/articles/paul-mccartney-wings-letting-go-download/
On October 29th, in honor of the two albums’ rereleases, the legendary singer has released an extended, remastered rendition of the Venus and Mars classic “Letting Go,” which is exclusive to McCartney’s website and will not appear on the Venus reissue. In terms of differences, Wings fans will be pleased to discover that the latest version of “Letting Go” is about a full minute longer than the original, features an extra smattering of guitar solos, a more prominent bassline, and basically no horns. (Unless horns are your thing.)

Ah she sings it so
I want to put her on the radio
One day and there you are
Ladies and Gentlemen
A brand new star. 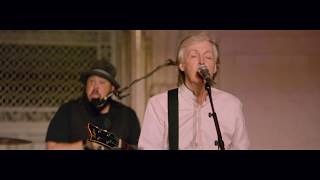 “Letting Go” has been played in 190 concerts and 13 soundchecks.

Latest concerts where Letting Go has been played

See all concerts where “Letting Go” has been played