Someone To Watch Over Me

Timeline This song has been recorded in 1968

Lord Of The Reedy River

Happiness Runs (Pebble And The Man)

Voyage Of The Moon

Lullaby Of The Leaves

"She's A Joan Baez Type, But We'll Soon Alter That"

“Someone to Watch Over Me” is a 1926 song composed by George Gershwin with lyrics by Ira Gershwin, assisted by Howard Dietz who penned the title. It was written for the musical Oh, Kay! (1926), with the part originally sung on Broadway by English actress Gertrude Lawrence while holding a rag doll in a sentimental solo scene. The musical ran for more than 200 performances in New York and then saw equivalent acclaim in London in 1927; all with the song as its centerpiece. Lawrence released the song as a medium-tempo single which rose to number 2 on the charts in 1927.

[…] More than 1,800 recordings of the song have been published, almost all of them performed in the slow ballad style. […]

Mary Hopkin covered “Someone To Watch Over Me” on her 1969 album “Post Card” produced by Paul McCartney.

I’m scared about this one. I loved doing it. Don’t laugh! People might laugh because they think “Oh, what on earth is she trying to do, and it doesn’t come off.” But I wanted to do it and I enjoyed doing it because it’s a sophisticated and different kind of song. And again — I’m not that kind of singer. But I always try. The backing Is Mike Cotton again — trumpet and guitar and so on.

On Post Card, you cut those big, show–stopping songs, like “There’s No Business Like Show Business” and “Someone To Watch Over Me.” Was Paul pushing those on you?

Not really. Paul and I talked things over. I didn’t know what I was capable of anyway, and I thought, “He must know better than I do.” I mean, I didn’t really question it. There were songs I was obviously much more comfortable with, like the Donovan songs. I was completely at ease with those, and those would’ve led directly into Earth song Ocean Song, where I did choose the songs.

On the US version of “Post Card”, “Someone To Watch Over Me” was replaced by Mary Hopkin’s hit single “Those Were The Days“.

Won't you tell him please
To put on some speed
Follow my lead?
Oh, how I need
Someone to watch over me 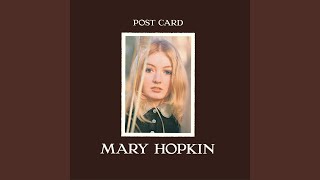