Album Songs recorded during this session officially appear on the Abbey Road LP.

As he did on July 17 and July 18, Paul McCartney arrived early at EMI Studios to re-record the lead vocals of “Oh! Darling“. Not satisfied, he would try again on July 23.

Perhaps my main memory of the Abbey Road sessions is of Paul coming into studio three at two o’clock or 2.30 each afternoon, on his own, to do the vocal on Oh! Darling. […] Paul came in several days running to do the lead vocal on Oh! Darling. He’d come in, sing it and say ‘No, that’s not it, I’ll try it again tomorrow’. He only tried it once per day, I suppose he wanted to capture a certain rawness which could only be done once before the voice changed. […]

The previous day, The Beatles had recorded the basic track of John Lennon’s “Come Together“. On this day, from 2:30 pm to 9:30 pm, they added the first series of overdubs.

John re-recorded his lead vocals and handclaps onto track four, with tape delay being added.

Electric piano was added to track five, as well as a rhythm guitar (played by George Harrison). According to engineer Geoff Emerick, John played the piano part, while Kevin Howlett, in the “Abbey Road” Super Deluxe edition book (2019), states it was Paul McCartney.

I could see that John was treating Paul in an offhand manner, despite the fact that Paul came up with the electric piano lick and swooping bass line that pretty well define “Come Together.” John even made a point of playing the piano line, once he’d looked over Paul’s shoulder and learned the part. That would have never happened in the old days: both men knew that Paul was the better piano player, and he normally would be
manning the keyboards even if they were recording a Lennon song.

John not only sang the lead, but also did all the backing vocals on “Come Together” by himself. He didn’t ask either Paul or George to join in, and neither of them volunteered. Harrison didn’t seem to care one way or the other, but I could see that it was getting to Paul. Finally, in some frustration, he blurted out, “What do you want me to do on this track, John?” John’s reply was a diffident “Don’t worry, I’ll do the overdubs on this.” Paul looked a bit hurt, then angry. For a moment I thought there was going to be an explosion. Instead, he contained himself, shrugged his shoulders, and simply walked out of the studio—one of the few times he ever left a session early. Paul had to have felt humiliated, but rather than having a fight or an argument about it, he chose to just get up and leave, without any dramatics. The next day, he returned, and nothing further was ever said about it.

Geoff Emerick – From “Here, There and Everywhere: My Life Recording the Music of The Beatles“, 2006

Some additional guitar, played by John, and a maraca, played by Ringo Starr, were added onto track six.

Work on “Come Together” would continue on the following day.

Musicians on "Come Together" 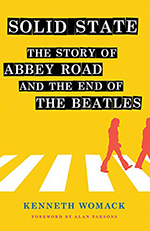