Mixing "Come Together", recording "The End"

Other Beatles songs talking about walrus

Officially appears on Hello Goodbye / I Am The Walrus

All Songs +1: The Beatles Are Live And Sounding Better Than Ever

John came in with an up-tempo song that sounded exactly like Chuck Berry’s ‘You Can’t Catch Me’, even down to the ‘flat-top’ lyric. I said, ‘Let’s slow it down with a swampy bass-and-drums vibe.’ I came up with a bass line and it all flowed from there. Great record.

“Come Together” is a song by the English rock band the Beatles, written by John Lennon and credited to Lennon–McCartney. The song is the opening track on their 1969 album Abbey Road and was also released as a single coupled with “Something“. The song reached the top of the charts in the United States and peaked at No. 4 in the United Kingdom.

It has been covered by several other artists, including Ike & Tina Turner, Aerosmith and Michael Jackson.

In early 1969, John Lennon and his wife, Yoko Ono, held nonviolent protests against the Vietnam War, dubbed the Bed-ins for Peace. In May, during the Montreal portion of the bed-in, counterculture figures from across North America visited Lennon, including American psychologist Timothy Leary, an early advocate of LSD whom Lennon admired. Leary intended to run for Governor of California in the following year’s election and asked Lennon to write him a campaign song based on the campaign’s slogan, “Come Together – Join the Party!” The resulting chant was only a line long: “Come together and join the party”. Lennon promised to finish and record the song, and Leary later recalled Lennon giving him a tape of the piece, but the two did not interact again.

In July 1969, during sessions for the Beatles’ album Abbey Road, Lennon used the phrase “come together” from the Leary campaign song to compose a new song for the album. Based on the 1956 single “You Can’t Catch Me” by American guitarist Chuck Berry, the composition began as an up-tempo blues number, only slightly altering Berry’s original lyric of “Here come a flattop / He was movin’ up with me” to “Here come ol’ flattop / He come groovin’ up slowly”. Lennon further incorporated the phrase “shoot me” from his unfinished and unreleased January 1969 song, “Watching Rainbows“. With lyrics inspired by his relationship with Ono, the lyrics were delivered quickly like the Berry song, author Peter Doggett writing that “each phrase [passes] too quickly to be understood at first hearing, the sound as important as the meaning”.

When Lennon presented the composition to his bandmates, his songwriting partner Paul McCartney noticed its similarity to “You Can’t Catch Me” and recommended they slow it in tempo to reduce the resemblance.

Beatles historian Jonathan Gould has suggested that the song has only a single “pariah-like protagonist” and Lennon was “painting another sardonic self-portrait”.

In a December 1987 interview by Selina Scott on the television show West 57th Street, George Harrison stated that he wrote two lines of the song.

The Beatles taped the basic track for “Come Together” at EMI Studios (now Abbey Road Studios) in Studio Three on 21 July 1969, during the sessions for Abbey Road. George Martin produced the session, assisted by balance engineers Geoff Emerick and Phil McDonald. At McCartney’s request, the session marked Emerick’s first with the group since July 1968, having quit working with them during sessions for their 1968 album, The Beatles (also known as “the White Album”), due to what he found a tense and negative atmosphere. The session also marked Lennon’s first new composition for the band in three months, having last recorded “The Ballad of John and Yoko” on 14 April.

The group taped eight takes of “Come Together”, with take six marked “best”. The line-up consisted of Lennon singing lead vocal, McCartney on bass, George Harrison on rhythm guitar and Ringo Starr on drums. Starr placed tea towels over his tom drums to further dampen their sound. Without needing to use his hands to play guitar, Lennon added handclaps each time he sang “Shoot me!”, also adding tambourine over both the solo and coda. Taped on 4-track recording equipment, at the end of the session, take six was copied over to 8-track tape in Studio Two, allowing for both overdubbing and the easy manipulation of EQ.

Overdubbing for “Come Together” took place in the week following the recording of the basic track. On 22 July, Lennon sang a new lead vocal and again added handclaps, both being treated to a tape delay, with automatic double tracking added during the choruses. At Lennon’s request, McCartney played a Fender Rhodes electric piano, with McCartney later recalling that Lennon “wanted a piano lick to be very swampy and smokey, and I played it that way and he liked that a lot”. Harrison added a heavily distorted guitar during the refrains, while Starr added a maraca. Work on the track continued the next day, with more vocals added. On 25 July, McCartney contributed a harmony vocal sung below Lennon’s part, and on 29 July, Lennon overdubbed a guitar during the song’s middle climax. Work on the song finished the next day, with Harrison playing a lead guitar solo with a Gibson Les Paul during the song’s coda.

Mixing on “Come Together” was completed on 7 August in Studio Two. Done on EMI’s new solid state mixing console, the EMI TG12345, Emerick later suggested that the console’s “softer and rounder” sonic texture influenced the band’s performances, with “the rhythm tracks … coming back off tape a little less forcefully”, the overdubs were subsequently “performed with less attitude”. He also suggests that, because McCartney’s bass hits on the “me” of Lennon’s line “Shoot me!”, only “Shoot” is easily audible on the finished recording. Ten stereo mixes were made during the process, with the first attempt marked “best”. Like the rest of Abbey Road, the song was never mixed for mono.

Apple Records, the Beatles’ EMI-distributed record label, released Abbey Road on 26 September 1969, with “Come Together” sequenced as the opening track. The song was issued as a double A-side single with Harrison’s “Something” on 6 October in America (as Apple 2654) and 31 October in Britain (as Apple R5814). Commercially, the single was a massive success, staying on the US Billboard Hot 100 chart for 16 weeks, and reaching No. 1. The single was released on 31 October 1969 in the UK and reached No. 4.

The first take of the song, recorded on 21 July 1969, with slightly different lyrics, was released in 1996 on the outtake compilation Anthology 3, and take five of the song was released on the Abbey Road 50th Anniversary release.

In May 2021, Ringo Starr said it was his favourite Beatles song in an interview on The Late Show with Stephen Colbert.

In late 1969, “Come Together” was the subject of a copyright infringement claim brought against Lennon by Big Seven Music, who was the publisher of Chuck Berry’s “You Can’t Catch Me”. Morris Levy, the owner of Big Seven Music, contended that it sounded similar musically to Berry’s original and shared some lyrics (Lennon sang: “Here come ol’ flattop, he come groovin’ up slowly”, and Berry’s had sung: “Here come a flattop, he was movin’ up with me”). Before recording, Lennon and McCartney deliberately slowed the song down and added a heavy bass riff in order to make the song more original. The case was settled out of court in 1973, with Levy’s lawyers agreeing that Lennon would compensate by recording three Big Seven songs for his next album. A brief version of “Ya Ya” with Lennon and his son Julian was released on the album Walls and Bridges in 1974. “You Can’t Catch Me” and another version of “Ya Ya” were released on Lennon’s 1975 album Rock ‘n’ Roll, but the third, “Angel Baby”, remained unreleased until after Lennon’s death. Levy again sued Lennon for breach of contract, and was eventually awarded $6,795. Lennon countersued after Levy released an album of Lennon material using tapes that were in his possession and was eventually awarded $84,912.96. The album was called Roots: John Lennon Sings the Great Rock & Roll Hits.

In 1995, Paul McCartney recorded a version of “Come Together” along with Paul Weller, Noel Gallagher, Steve Cradock, Steve White, and Carleen Anderson, for a project to benefit the War Child charity’s aid efforts in war-stricken areas.

On ‘Come Together’, I would have liked to sing harmony with John and I think he would have liked me to. But, I was too embarrassed to ask him and I don’t work to the best of my ability in that situation.

Paul McCartney – From Badman, Keith. The Beatles: Off the Record

[John] originally brought it over as a very perky little song, and I pointed out to him that it was very similar to Chuck Berry’s You Can’t Catch Me. John acknowledged it was rather close to it so I said, ‘Well, anything you can do to get away from that.’ I suggested that we tried it swampy – ‘swampy’ was the word I used – so we did, we took it right down. I laid that bass line down which very much makes the mood. It’s actually a bass line that people now use very often in rap records. If it’s not a sample, they use that riff. But that was my contribution to that.

He wear no shoeshine
He got toe jam football
He got monkey finger
He shoot Coca Cola
He say I know you, you know me
One thing I can tell you is
You got to be free
Come together, right now
Over me

He bad production
He got walrus gumboot
He got Ono sideboard
He one spinal cracker
He got feet down below his knees
Hold you in his armchair
You can feel his disease
Come together, right now
Over me

Performed by :
The Smokin' Mojo Filters

Performed by :
The Smokin' Mojo Filters

3:40 • Outtake • C • Stereo • Take 1 - Not playing an instrument, John clapped his hands while singing, adding tambourine late in the piece, with the other Beatles contributing what for the first take is a notably cohesive bass, guitar and drums backing to fill out this four-track recording. The absence of the echo that, at John's request, would smother the master version lends a stark clarity to the lyrics, which altered slightly when the definitive vocal was overdubbed.

See all bootlegs containing “Come Together” 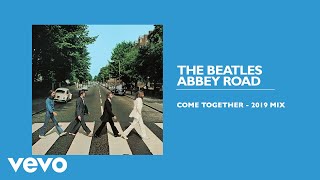 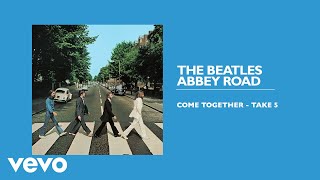