On November 24, 1966, after five months spent away from the recording studios, The Beatles were back at EMI Studios, Abbey Road, to start recording their next single and album. They spent the day recording Take 1 of John Lennon’s new song, “Strawberry Fields Forever“.

On this day, November 28, from 7 pm to 1:30 am, they continued the work on “Strawberry Fields Forever“, recording three more takes (numbered takes 2 to 4), with John Lennon on guitar, Paul McCartney on mellotron, George Harrison on maracas and Ringo Starr on drums.

On those takes, the song was arranged slightly differently than on take 1 – whereas Take 1 had begun with the first verse, this time it started with a mellotron introduction followed by the chorus. The key was also changed from C to B flat.

A few days later, we reconvened at Abbey Road and work resumed on “Strawberry Fields Forever,” as the song had been titled. The big breakthrough that night was Paul’s coming up with the stunning Mellotron line that opens the song. Paul’s inspiration really set the stage. In many ways, it was a harbinger of things to come over the next several months — the perfect, unique introduction to a series of near-perfect, near-unique sessions.

Geoff Emerick – From “Here, There and Everywhere: My Life Recording the Music of The Beatles“, 2006

Take 2 broke down around two and a half minutes. Take 3 was a false start. Take 4 was complete and received some overdubs. John added his lead vocals and some staccato guitar, George added some mellotron and Paul a bass line.

Take 4 was considered worthwhile at this stage and three rough mixes were then done to cut some acetates. It was released on Sgt. Pepper’s Lonely Hearts Club Band (50th anniversary boxset) in 2017. 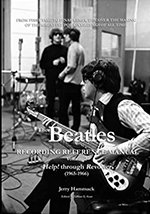