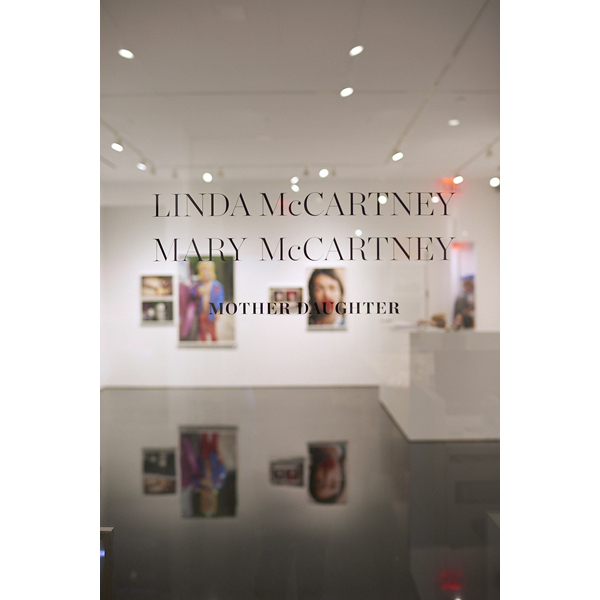 My mother shaped my view of the world and inspired me to embrace spontaneity and capture the unforced. To show with her is such an honor for me and validates my journey as a photographer.
—Mary McCartney

Exhibited together for the first time, the photographs of the late Linda McCartney and her daughter Mary explore the connective tissue of family, common experience, and a love of the photographic medium. Their images are highly instinctual, rather than analytical; as well they reveal a great ability to capture fleeting moments of intimacy.

Spanning three decades, works by the photographers are organized to reveal the almost symbiotic harmony between them. The exhibition is a treasury of moments derived from relaxed interactions with family, a dazzling array of celebrities—Aretha Franklin, Jimi Hendrix, Mick Jagger, Brian Jones, Kate Moss, Rihanna—and everyday life. Evident is a shared sensibility between mother and daughter in how they establish an emotional rapport with their subjects and exact a sense of their true selves. Rather than distinguishing between works by Linda or Mary, the installation proposes their vision of the world as one.

Since the mid-sixties Linda photographed such icons as B.B. King, The Rolling Stones, and The Grateful Dead, producing quintessential images that reflected the music revolution of her era. Her direct and distinctive photographs reflect the individual charisma of her subjects. In 1969, one year after being the first female photographer to do a cover for Rolling Stone Magazine, Linda married Beatles member Paul McCartney. Alongside photography, her interests ranged from writing and music to filmmaking and animal-rights activism; she continued to document landscape, portraits, family, and animals throughout her life.

Mary expands on her mother’s affinities. Like Linda, her candid eye bonds with and draws out people’s inner vibrance, transmitting it to the photographic image. Her “natural” images focus intently on her subjects, from her intimate study of professional ballerinas at the Royal Ballet to candid moments behind the scenes of fashion shows, and strangers on city streets. As well as shooting the 2013 Art Calendar for renowned lens manufacturer Zeiss, Mary has captured portraits of major figures in culture and society, such as Lou Reed, Eric Clapton, Vivienne Westwood, Helen Mirren and Queen Elizabeth II. Her recent photographs of strangers stand alongside her Instagram campaign #someone, evincing mystique in the ordinary and everyday.

Recently we visited my daughter Mary’s exhibition at the Gagosian Gallery on Madison Avenue in New York City. It’s really fantastic and titled ‘Mother Daughter’ as Mary is exhibiting with her Mum Linda. If you are anywhere in the New York area it’s a must see. Lots of great photos from Mary and Linda on sale for a limited time. Dare I suggest that one of them would make the perfect Christmas present! It’s a great show, so check it out! Love Paul.