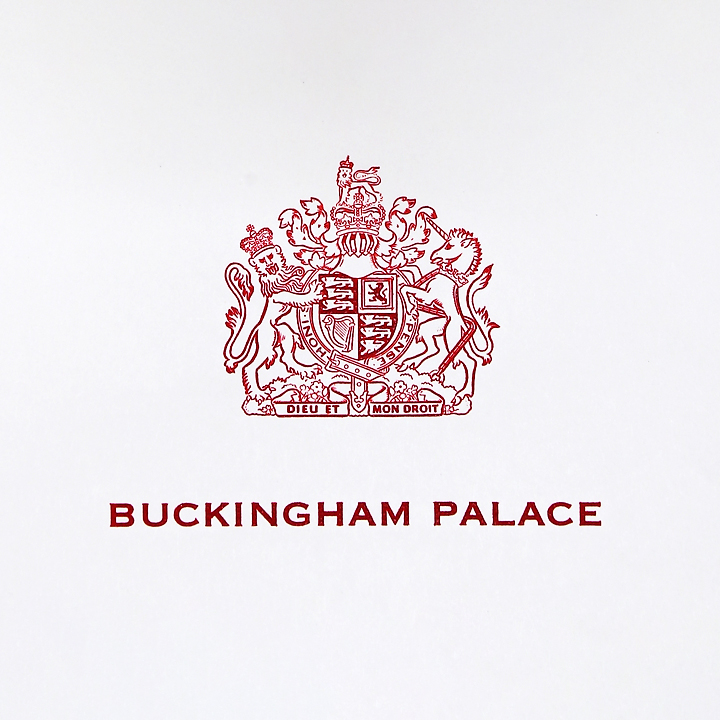 On December 31, 1996, it was announced that Paul McCartney was appointed Knight Bachelor, as part of Queen Elizabeth II’s New Year Honours’ list. The ceremony was held on March 11, 1997. From Wikipedia:

[…] The 54-year-old lad from Liverpool became Sir Paul in a centuries-old ceremony of pomp and solemnity at Buckingham Palace in central London. Fans waited outside in a scene reminiscent of Beatlemania of the 1960s. Crowds screamed as McCartney swept through the gates in his chauffeur-driven limousine and he answered with a thumbs-up.

McCartney’s wife, Linda, who was fighting breast cancer, did not accompany him, but three of their four children were at the palace. “I would have loved the whole family to be here, but when we heard there were only three tickets, we had to draw straws,” McCartney said. […]

McCartney admitted he was very nervous before the ceremony but said it had been a great experience. “Proud to be British, wonderful day and it’s a long way from a little terrace (street) in Liverpool,” he told reporters. Aides said he won’t be calling himself “Sir Paul,” the title conferred when the queen tapped him on each shoulder with a naked sword as he knelt on the investiture stool. McCartney’s knighthood was considered long overdue even by the conservative standards used in Britain, which sees most such honors going to judges, scientists and politicians. […]

It was one of the best days ever. I felt very honoured to be offered a Knighthood and of course it would have been rude to turn it down! I remember it was in the springtime and the skies were blue. It was a wonderful day and I remember thinking I’d come a long way from a little terrace house in Liverpool!

This is one of the best days of my life. Today is fantastic, there is a blue sky and it’s springtime. My mum and dad would have been extremely proud – and perhaps they are. l would never have dreamed of this day. If we’d had that thought when we started off in Liverpool it would have been laughed at as a complete joke. Proud to be British. A wonderful day. It’s a long way from a little terrace in Liverpool.

It’s like getting a big school prize. You don’t go after it but if you do some good drawings they give you the art prize because they think you’re alright. And that’s the way I take the knighthood. It’s not become a big ego trip. It’s just something nice that was offered and it would be rude to turn it down. The best thing about it is that when me and Linda are sitting alone on holiday, watching the sunset, I can turn to her and say ‘Hey, you’re a Lady’. It’s a giggle, because you get to make your girl a Lady – although she always was to me anyway

Such an accolade is like passing all your exams ever with a triple A-plus. Originally, half of me was a bit cynical. I thought about whether I should accept it or question it. It came down to the feeling that it was a very great honor that the people of Liverpool and the British people of my generation could share in. It was a great day when the queen put the old Edward the Confessor’s sword on my shoulder. It is hugely historical. And one of my kids cried. That brought home what a big deal it was.

You never forget the fans who put you up there. This brings back memories of 1965 — it seems strange being here without the other three.

Here is what Paul said to reporters on this day:

Have you spoken to the other Beatles about this?

Yep. They make fun of me. They keep ringing us and calling me ‘Your Holiness’, but they’re having a good time. It seems strange being here without the other three. I keep looking over my shoulder for them.

She’s doing fine, thanks. We drew straws, ‘cos we could only get three tickets. So I’ve got my three youngest kids with me.

Linda is fine. She’s doing very well. I would have loved my whole family to have been here, but as we only had three guest tickets, Linda and Heather decided to stay out of the limelight today.

l’m still heavily involved in music. And I have a new album, Flaming Pie, out in May. It’s mainly a solo album, but Ringo plays on it.

PAUL McCartney was knighted by the Queen yesterday while fans screamed and waved Union Jacks outside Buckingham Palace. The former Beatle said he kept looking over his shoulder for the rest of the “Fab Four”, who were with him at the Palace in 1965, when the Beatles received their OBEs.

“You never forget the fans who put you up there,” he said. “This brings back memories of 1965 — it seems strange being here without the other three.”

He said George Harrison and Ringo Starr had started calling him “Your Holiness” since his knighthood in the New Year Honours List.

“Receiving it is one of the best days of my life,” he said. “My mum and dad would have been proud — and perhaps they are. It is a huge honour. Coming from a Liverpool terraced house to this house is quite a journey.”

Sir Paul, 54, said he never dreamed, back in the days of playing at the Cavern Club in Liverpool, that he would be receiving a knighthood at Buckingham Palace. “It would have been seen as a joke,” he said.

“It’s fantastic. The sky is blue and it’s springtime.” He arrived at the palace in a chauffeur-driven Mercedes without his wife, Linda, who is recovering from cancer. Three of their four children — James, 19, Mary, 27, and Stella, 25 — were present to see him dubbed by the Queen.

He said his wife was quite well. “She is recovering, but it’s a long haul. You can never be complacent. I would have loved the whole family to be here, but when we heard there were only three tickets, we had to draw straws, and Linda and Heather decided to stay out of the limelight.”

The Queen asked Sir Paul how his Liverpool Institute for Performing Arts was progressing. “Her Majesty asked about the school which she had kindly opened, and I told her it was going well.”

He added: “l am still heavily involved in music and I have an album coming out in May. It is mainly a solo album but Ringo plays on it. I am also writing a full length orchestral piece for the London Symphony Orchestra, which is due to be performed at the Albert Hall on Oct 14.”

Debbie Wakeford, 38, a fan from London, had arrived at the Palace at 6am. “Paul deserves it for everything he’s done,” she said. “It is long overdue. But George and Ringo deserve it too.”

Ocula Didier, 32, and Tonnelei Pascal, 33, two Belgian fans, were also outside the Palace. Mr Didier said: “You can see how popular Paul McCartney is from the diverse range of people here.”

Joan Collins, the actress, received her OBE. Wearing a lilac outfit with matching wide-brimmed hat, she said she was proud to be given the honour.

“To me, it is one of the reasons why I will always be British,” she said.

Linda’s knight out at Palace

LINDA McCartney will be at Buckingham Palace next Tuesday to see husband Paul receive his knighthood from the Queen.

The ceremony, 24 hours before the couple celebrate their 28th wedding anniversary, will be her first public appearance for several months. Linda, who has had an operation for breast cancer, was not with Paul when the Queen opened his Liverpool Institute For Performing Arts last year. But she is now said to be in good health and “busier than ever.”

The McCartneys’ publicist, Geoff Baker, said: “Linda is working on a new cook book and there are a lot of photographic projects coming up.”