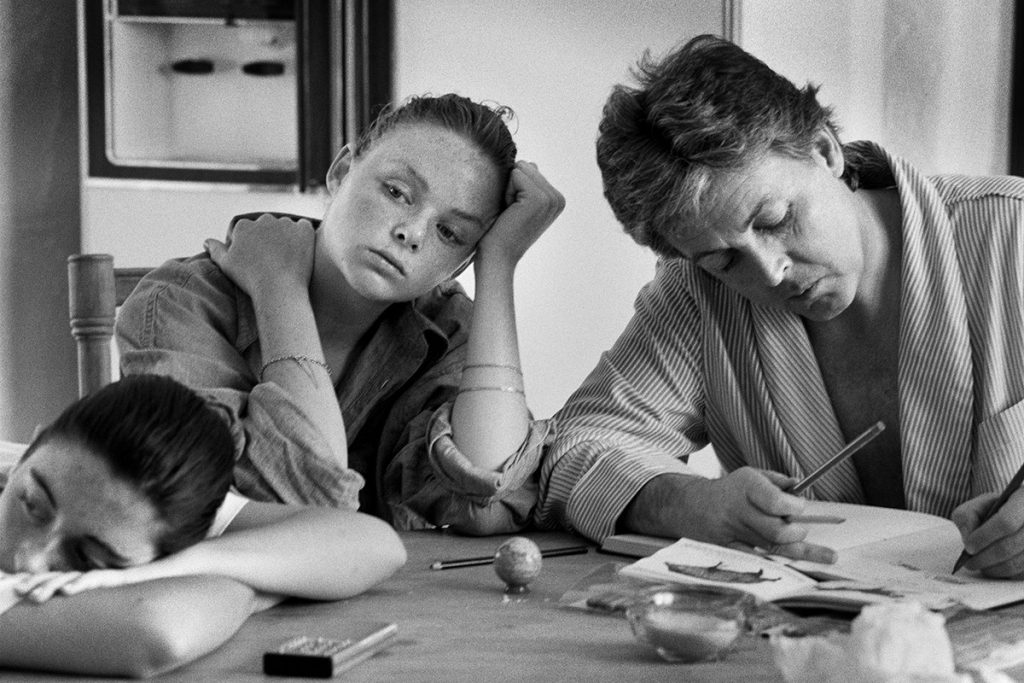 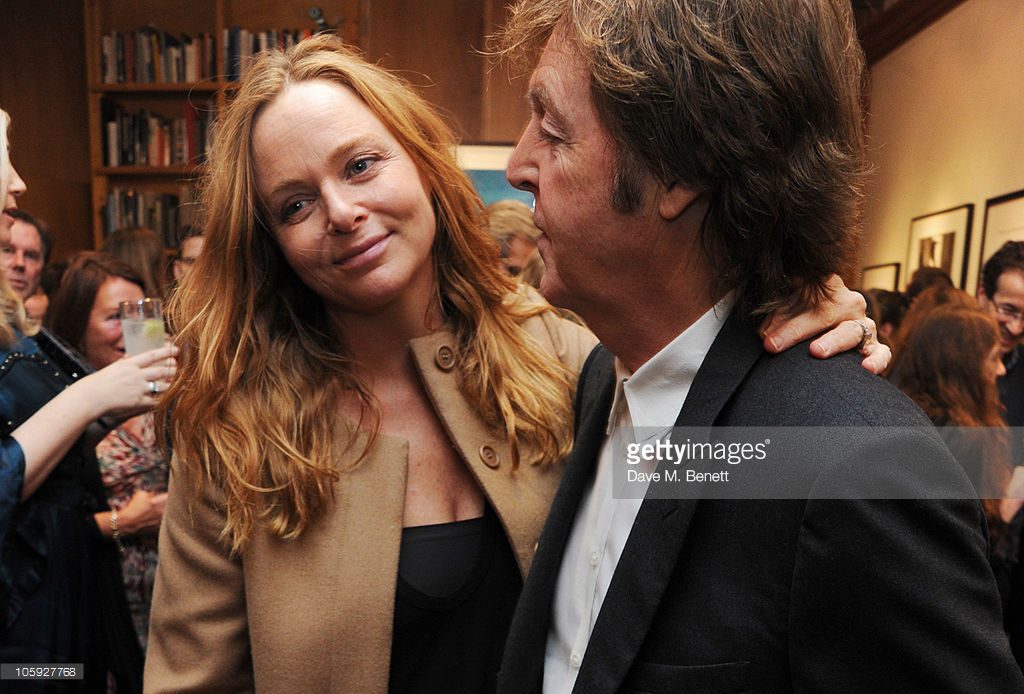 McCartney was born in Lambeth, London, the second child of Beatle Paul McCartney and American photographer Linda McCartney (1941–1998). She is named after her maternal great-grandmothers (both of Linda McCartney’s grandmothers were named Stella). As a young girl, McCartney travelled the globe with her parents and their group Wings, along with her siblings: older sister Heather (who was legally adopted by Paul McCartney), older sister Mary, and younger brother James. According to her father, the name of Wings was inspired by Stella’s difficult birth. As his daughter was being born by emergency caesarean section, Paul sat outside the operating room and prayed that she be born “on the wings of an angel.”

Despite their fame, the McCartneys wanted their children to lead as normal a life as possible, so Stella and her siblings attended local state schools in East Sussex, one of them being Bexhill College. McCartney has said that while attending state school, she was a victim of bullying, as well as being a bully herself.

McCartney became interested in designing clothes as a youth. At age thirteen, she designed her first jacket. Three years later, she interned for Christian Lacroix, working on her first haute couture collection, honing her skills working for Edward Sexton, her father’s Savile Row tailor for a number of years.

She studied her foundation at Ravensbourne College of Design and Communication, followed by Fashion Design at Central Saint Martins in the early 1990s: she graduated in 1995. Her graduation collection was modelled by friends and supermodels Naomi Campbell, Yasmin Le Bon and Kate Moss – for free – at the graduation runway show. The collection was shown to a song penned by her famous father, called “Stella May Day.” The show made front-page news, and the entire collection was sold to Tokyo, a London boutique. The designs were licensed to Browns, Joseph, Bergdorf Goodman and Neiman Marcus. In 1998, she designed her sister Mary’s wedding dress for her wedding to television producer Alistair Donald.

A lifelong vegetarian, McCartney does not use any leather or fur in her designs. She supports PETA. Some of McCartney’s designs have text that elaborates on her “no animal” policy; for example, one of her jackets for Adidas says, “suitable for sporty vegetarians” on the sleeve. She does use wool, silk, and other animal-derived fabrics in her designs.

In March 1997 McCartney was appointed creative director of Paris fashion house Chloé, following in the footsteps of Karl Lagerfeld. Lagerfeld was less than impressed with the house’s choice, stating, “Chloé should have taken a big name. They did, but in music, not fashion. Let’s hope she’s as gifted as her father.” Despite initial skepticism, McCartney’s designs have enjoyed considerable commercial and critical success. She was accompanied to Chloé by her assistant and friend Phoebe Philo, who later replaced her as design director.

In 2001, McCartney launched her own fashion house under her name in a joint venture with Gucci Group (now Kering) and showed her first collection in Paris. McCartney now operates 17 freestanding stores in locations including Manhattan’s Soho, London’s Mayfair, LA’s West Hollywood, Paris’ Palais Royal, Barcelona’s Passeig de Gracia and Milan, and recently opened doors in Rome, Miami and Houston. Her collections are now distributed in over 50 countries through 600 wholesale accounts including specialty shops and department stores.

In 2003, McCartney launched her first perfume, Stella. In January 2007, McCartney launched a skincare line, CARE. The 100% organic line includes seven products, from a cleansing milk made with lemon balm and apricot to green tea and linden blossom floral water.

In November 2010, the Stella McCartney Kids collection was launched for newborns and children up to age 12.

In November 2016, McCartney launched her first menswear collection. The collection is made up of many athleisure, pyjama-like casual outfits. McCartney said her father had provided inspiration for the collection.

In 2004, Stella McCartney was the designer of clothes for Madonna’s Re-Invention Tour, Annie Lennox’s summer tour, and Gwyneth Paltrow’s and Jude Law’s costumes for the film Sky Captain and The World of Tomorrow.

She also launched a joint-venture line with Adidas, establishing a long-term partnership with the corporation in September 2004. This line is a sports performance collection for women. In September 2010, Stella McCartney was appointed Team GB’s Creative Director for the 2012 Olympics by Adidas – the first time in the history of the games that a leading fashion designer has designed the apparel for a country’s team across all competitions for both the Olympic and the Paralympic Games.

In 2005, she designed a range of clothing and accessories for H&M to boost public awareness of her own brand and to create more affordable options for her fans. The line was released in November of that year and sold out almost immediately on launch day in record time. On 12 March 2007, McCartney’s limited edition 42-piece range was released to just 100 Target stores exclusively in Australia. The range was priced from $30 for a silk scarf to $200 for a taffeta trench coat.

In January 2008, McCartney’s collaboration with lingerie label Bendon was scheduled to be released to department stores, speciality stores and Stella McCartney stores. McCartney was also scheduled, in early 2008, to release a line of handbags for LeSportsac. The collection has 30–40 styles and priced at $200–500. The collection consists of travel bags, luggage, baby accessories and bags for mothers with infants and toddlers. The line is sold at high end retailers, the Los Angeles and New York Stella McCartney stores, select LeSportsac boutiques, and will be available for purchase online.

Since starting her own label, McCartney has also collaborated on projects with several artists including Gary Hume, R. Crumb, Jeff Koons, David Remfry and Ed Ruscha.

In January 2010, McCartney announced she would be collaborating with Disney to create an Alice in Wonderland-inspired jewelry collection.

In July of the same year, together with PETA and eco designer Atom Cianfarani, McCartney worked to petition the British Ministry of Defence to cease the use of Canadian Black Bears as the fur for their guards’ hats. As of yet, the Military has not taken up the change.

In September 2010, Stella McCartney was appointed Team GB’s Creative Director for the 2012 Olympics by Adidas. The uniforms were worn by athletes in the British Olympic and Paralympic teams who were competing in the London 2012 Olympic Games and Paralympic Games. In March 2012 the Team GB kit was publicly displayed.

In October 2010, Stella relaunched her Designers for Target range in Australia. Priced at A$30–249, it proved less popular than its previous iteration.

In July 2011 she participated at the catwalk of The Brandery fashion show in Barcelona.

In April, it was announced, Stella McCartney was clothing the Olympic British team.

In 2012, Stella McCartney was among the British cultural icons selected by artist Sir Peter Blake to appear in a new version of his artwork – the Beatles’ Sgt. Pepper’s Lonely Hearts Club Band album cover – to celebrate the British cultural figures of his life that he most admires. In February 2013 she was assessed as one of the 100 most powerful women in the United Kingdom by Woman’s Hour on BBC Radio 4.

McCartney married British publisher Alasdhair Willis on 30 August 2003 at Mount Stuart House on the Isle of Bute. McCartney’s wedding dress was an updated version of her mother’s wedding dress from her March 1969 marriage ceremony to Paul McCartney.

Willis now works as creative director of shoewear brand Hunters. In 2015, he was named one of GQ’s 50 best dressed British men.

Stella has a younger half-sister, Beatrice Milly McCartney, born on 28 October 2003 to her father and his second wife, Heather Mills.

The Anti-Heroin Project: It's A Live-In World