Recording "Here Comes The Sun", "Something"

Recording "Because", mixing "Something", "Here Comes The Sun"

Recording "Golden Slumbers", "Carry That Weight", "The End", "Something", "Here Comes The Sun"

Mixing "Golden Slumbers / Carry That Weight / The End", "Something", recording and mixing "Here Comes The Sun"

“Here Comes the Sun” is a song written by George Harrison that was first released on the Beatles’ 1969 album Abbey Road. Along with “Something” and “While My Guitar Gently Weeps“, it is one of Harrison’s best-known compositions from the Beatles era. The song was written at the country house of his friend Eric Clapton, where Harrison had chosen to play truant for the day, to avoid attending a meeting at the Beatles’ Apple Corps organisation. The lyrics reflect the composer’s relief at both the arrival of spring and the temporary respite he was experiencing from the band’s business affairs.

The Beatles recorded “Here Comes the Sun” at London’s EMI Studios in the summer of 1969. Led by Harrison’s acoustic guitar, the recording also features Moog synthesizer, which he had introduced to the Beatles’ sound after acquiring an early model of the instrument in California. Reflecting the continued influence of Indian classical music on Harrison’s writing, the composition includes a series of unusual time changes over the “Sun, sun, sun, here it comes” refrain.

“Here Comes the Sun” has received acclaim from music critics. Combined with his other contribution to Abbey Road, “Something“, it gained for Harrison the level of recognition as a songwriter that had previously been reserved for his bandmates John Lennon and Paul McCartney. Harrison played the song during many of his relatively rare live performances as a solo artist, including at the Concert for Bangladesh in 1971 and, with Paul Simon, during his appearance on Saturday Night Live in 1976. Richie Havens and Steve Harley & Cockney Rebel each had hit singles with “Here Comes the Sun” in the 1970s. Nina Simone, George Benson, Booker T. & the M.G.’s, Peter Tosh and Joe Brown are among the many other artists who have covered the song.

“Here Comes the Sun” is one of Harrison’s best-known Beatles compositions alongside “Something” and “While My Guitar Gently Weeps“. The early months of 1969 were a difficult period for Harrison: he had quit the band temporarily, he was arrested for marijuana possession, and he had his tonsils removed.

Harrison states in his autobiography, I, Me, Mine:

“Here Comes the Sun” was written at the time when Apple was getting like school, where we had to go and be businessmen: ‘Sign this’ and ‘sign that.’ Anyway, it seems as if winter in England goes on forever, by the time spring comes you really deserve it. So one day I decided I was going to sag off Apple and I went over to Eric Clapton’s house. The relief of not having to go see all those dopey accountants was wonderful, and I walked around the garden with one of Eric’s acoustic guitars and wrote “Here Comes the Sun”.

As Clapton states in his autobiography, the house in question is known as Hurtwood Edge. When interviewed in the Martin Scorsese documentary George Harrison: Living in the Material World, Clapton said he believed the month was April. Data from two meteorological stations in the London area show that April 1969 set a record for sunlight hours for the 1960s. The Greenwich station recorded 189 hours for April, a high that was not beaten until 1984. The Greenwich data also show that February and March were much colder than the norm for the 1960s, which would account for Harrison’s reference to a “long, cold, lonely winter“.

The song is in the key of A major. The main refrain uses a IV (D chord) to V-of-V (B chord) progression (the reverse of that used in “Eight Days a Week” and “Sgt. Pepper’s Lonely Hearts Club Band“). The melody in the verse and refrain basically follows the pentatonic scale from E up to C♯ (scale steps 5, 6, 1, 2, 3).

One feature is the increasing syncopation in the vocal parts. Another feature is the guitar flat-picking that embellishes the E7 (V7) chord from 2:03 to 2:11, creating tension for resolution on the tonic A chord at “Little darlin’ “. The bridge involves a ♭III-♭VII-IV-I-V7 triple descending 4th (or Tri-Plagal) progression (with an extra V7) as the vocals move from “Sun” (♭III or C chord) to “sun” (♭VII or G chord) to “sun” (IV or D chord) to “comes” (I or A chord) and the additional 4th descent to a V7 (E7) chord. The lyric here (“Sun, sun, sun, here it comes”) has been described as taking “on the quality of a meditator’s mantra“. The song also features extreme 4/4 (in the verse) and a sequence of 11/8 + 4/4 + 7/8 (which can also be transcribed as 11/8 + 15/8) in the bridge, phrasing interludes which Harrison drew from Indian music influences. In the second verse (0:59–1:13) the Moog synthesizer doubles the solo guitar line and in the third verse the Moog adds an obbligato line an octave above. The last four bars (2:54–3:04) juxtapose the guitar break with a repeat of the bridge.

Harrison, Paul McCartney and Ringo Starr recorded the rhythm track in 13 takes on 7 July 1969. John Lennon did not contribute to the song as he was recovering from a car crash. Towards the end of the session Harrison spent an hour re-recording his acoustic guitar part. He capoed his guitar on the 7th fret, resulting in the final key of A major (in fact, slightly above A major due to the track being varispeeded by less than a semitone). He also used the same technique on his 1965 song “If I Needed Someone“, which shares a similar melodic pattern. The following day he taped his lead vocals, and he and McCartney recorded their backing vocals twice to give a fuller sound.

A harmonium and handclaps were added on 16 July. Harrison added an electric guitar run through a Leslie speaker on 6 August, and the orchestral parts (George Martin’s score for two piccolos, two flutes, two alto flutes and two clarinets) were added on 15 August. “Here Comes the Sun” was completed four days later with the addition of Harrison’s Moog synthesizer part. The master tapes reveal that Harrison recorded a guitar solo that was not included in the final mix at that time.

Abbey Road was released on 26 September 1969 with “Here Comes the Sun” sequenced as the opening track on side two of the LP. Along with “Something“, which was issued as a single from the album, the song established Harrison as a composer to match Lennon and McCartney. According to author Alan Clayson, Harrison’s two Abbey Road compositions received “the most widespread syndication” of all the tracks on the album, partly through the number of cover versions they attracted.

In Japan, “Here Comes the Sun” was also issued on a single in 1970, as the B-side to McCartney’s Abbey Road track “Oh! Darling“. While the Beatles never released the track on a single in Britain, new rules implemented to the UK Singles Chart in 2007 allowed any song to enter the charts based on download sales. This allowed several songs recorded by the Beatles to list on the charts when the group’s back catalogue became available for download on iTunes in 2010, including “Here Comes the Sun“, which peaked at number 58 on 27 November that year.

Writing for Rolling Stone in 2002, Mikal Gilmore likened “Here Comes the Sun” to the McCartney-written “Let It Be” and Lennon’s “Imagine“, as Harrison’s “graceful anthem of hope amid difficult realities“. While expressing regret at having underestimated Harrison as a songwriter, Martin described “Here Comes the Sun” as being “in some ways one of the best songs ever written“.

The track has appeared in many critics’ lists of the Beatles’ best recordings. Among these, the NME placed it at number 4 in the magazine’s 2015 list of “the 100 Greatest Beatles Songs“. In a similar poll compiled by Mojo in 2006, where the song appeared at number 21, Danny Eccleston described it as “perhaps the best song – outside ‘Jerusalem’ – that religion can claim credit for“, adding: “Those who professed surprise at Harrison’s immediate elevation to Most Successful Solo Beatle status [in 1970] clearly weren’t listening to this.” “Here Comes the Sun” appeared at number 28 on Rolling Stone’s 2010 list, where the editors commented: “Along with ‘Something,’ it gave notice that the Beatles now had three formidable composers.” […]

4:18 • Studio version • (with "The Inner Light" transition) – As mentioned by Giles Martin, the track includes tabla from "Within You Without You", backing vocals from "Oh! Darling" and a bass line from "I Want You (She's So Heavy)". 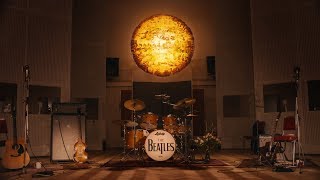