Recording and mixing "I Am The Walrus", "Flying"

Mixing "Hello, Goodbye", "I Am The Walrus", "Your Mother Should Know", "Magical Mystery Tour"

“Magical Mystery Tour” is a song by the Beatles, the opening track and theme song for the album, double EP and TV film of the same name. Unlike the theme songs for their other film projects, it was not released as a single.

“Magical Mystery Tour” is credited to Lennon–McCartney, though written primarily by Paul McCartney. McCartney said it was co-written. John Lennon said, “Paul’s song. Maybe I did part of it, but it was his concept.” In 1972, Lennon said, “Paul wrote it. I helped with some of the lyric.” The remaining lyrics explain in a general way the premise of the film: a mystery tour of the type that was popular in Britain when the Beatles were young. Lennon and McCartney expanded the tour to make it magical, which allowed it to be “a little more surreal than the real ones.”

There are also other interpretations of the song as an explicit reference to drugs, since the Beatles were experiencing acid in those years. Paul McCartney himself said about the song:

“Because those were psychedelic times it had to become a magical mystery tour, a little bit more surreal than the real ones to give us a license to do it. But it employs all the circus and fairground barkers, ‘Roll up! Roll up!’, which was also a reference to rolling up a joint. We were always sticking those little things in that we knew our friends would get; veiled references to drugs and to trips. ‘Magical Mystery Tour is waiting to take you away,’ so that’s a kind of drug, ‘it’s dying to take you away’ so that’s a Tibetan Book of the Dead reference. […] Magical Mystery Tour was the equivalent of a drug trip and we made the film based on that.“

Recording began on 25 April 1967, less than a week after the final sessions for Sgt. Pepper’s Lonely Hearts Club Band. The song was not complete when the session began and much of the evening was spent in rehearsals, but by the end of the evening the basic rhythm track was complete. Bass guitar and vocal overdubs were added by the Beatles on 26 and 27 April. On 3 May, the brass fanfare and other parts were added in a disorganised session where the trumpet players began the evening without a score. According to Philip Jones, a friend of one of the players who was present, one of those players, Elgar Howarth, eventually took matters into his own hands and wrote a score out for them.

Also added to the final mix is the sound of the Bedford VAL14/Plaxton Coach (URO 913E), owned by Fox of Hayes and hired by The Beatles for the film. The screech of the tyres was done by Ringo Starr himself, when he drove the Bedford VAL around RAF West Malling at a high speed.

“Magical Mystery Tour” was released as the title track to a six-song double EP in the United Kingdom on 8 December 1967. In the United States, the double EP was stretched to an LP by adding five songs previously released as singles. During the CD era, the LP version was issued on CD in both countries.

Writing in the May 1968 issue of Esquire, Robert Christgau dismissed “Magical Mystery Tour” as “disappointing” and “perfunctory“. In his book Revolution in the Head, Ian MacDonald wrote of the song: “While energetic, the result is manufactured, its thin invention undisguised by a distorted production tricked out with unconvincing time and tempo changes.” Writing for Rough Guides, Chris Ingham describes it as “the bare bones of a song accompanied by faintly tired brassy parping“.

Musicologist Walter Everett writes: “I agree with those who call ‘Magical Mystery Tour’ a warmed-over ‘Sgt. Pepper’-type fanfare/invitation to what’s to follow … The transcendent modulation is not accompanied by compelling enough lyrics or sufficient melodic interest … to rise to greatness.” Richie Unterberger of AllMusic calls it “a pleasant, get-up-and-go tune, but not one of the Beatles’ very best songs“.

John and I remembered mystery tours, and we always thought this was a fascinating idea: getting on a bus and not knowing where you were going. Rather romantic and slightly surreal! All these old dears with the blue rinses going off to mysterious places. Generally there’s a crate of ale in the boot of the coach and you sing lots of songs. It’s a charabanc trip. So we took that idea and used it as a basis for a song and the film.

[…] I used to go to the fairgrounds as a kid, the waltzers and the dodgems, but what interested me was the freak shows: the boxing booths, the bearded lady and the sheep with five legs, which actually was a four-legged sheep with one leg sewn on its side. When I touched it, the fellow said, ‘Hey, leave that alone!’ these were the great things of your youth. So much of your writing comes from this period; your golden memories. If I’m stuck for an idea, I can always think of a great summer, think of a time when I went to the seaside. Okay, sand sun waves donkeys laughter. That’s a pretty good scenario for a song.

[…] Magical Mystery Tour was co-written by John and I, very much in our fairground period. One of our great inspirations was always the barker. ‘Roll up! Roll up!’ The promise of something: the newspaper ad that says ‘guaranteed not to crack’, the ‘high class’ butcher, ‘satisfaction guaranteed’ from Sgt Pepper. ‘Come inside,’ ‘Step inside, Love’; you’ll find that pervades a lot of my songs. If you look at all the Lennon-McCartney things, it’s a thing we do a lot.

The original Magical Mystery Tour film soundtrack uses a May 4 mono mix with different vocals at the beginning: a faster “Roll up, roll up, roll up” with “hurry! hurry!” over it, as well as spoken lines by John during the break (“When a man buys a ticket for a magical mystery tour. . . the incredible Magical Mystery Tour”, the last part given heavy reverb). The stereo mix made in 1988 for home video has the same variant vocals (though the “hurry” lines are louder). These vocals unique to the film may, like the sound effects, be on the film soundtrack proper and not on the 4-track master of the song.

Lewisohn says a new vocal line (unspecified) was added Nov 7 to existing mixes. Possibly this is the “Roll up…” line heard on record and not in the film. No stereo mix is booked prior to Nov 7 either so I presume the one used on records was made then.

Near the end of the instrumental break, the brass part under “Noooow!” is longer in stereo [b] than [a].

Roll up, roll up for the Magical Mystery Tour!
Step right this way! 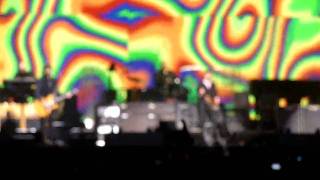 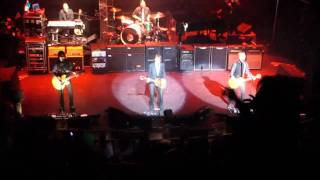 “Magical Mystery Tour” has been played in 163 concerts and 48 soundchecks.

Latest concerts where Magical Mystery Tour has been played

See all concerts where “Magical Mystery Tour” has been played

So I don't fully get it. Was the additional vocals at the beginning ever cut on vinyl? Or is that version only on CD. And if it was on vinyl, which release?