Almost two years to the day since Paul McCartney rocked The Budokan for the second history making time in his career, music’s most revered icon has announced he’ll be returning to one of Japan’s most sacred venues with his all new ‘One On One’ tour for a special concert on Tuesday 25th April. The announcement follows Paul selling out three nights at the massive Tokyo Dome. This show is set to be the biggest music event in Japan in 2017.

Speaking about his return Paul said: “The Budokan is such a special venue for me. I have amazing memories from first visiting in the 60s and then again on our last tour. I was already excited to be returning to Japan but with the news of the three Dome shows selling out and now this extra date I can’t wait to get back with the band and celebrate!”

In 2015 Paul performed an emotionally charged two-hour concert, including 28 songs, at The Budokan as part of his ‘Out There’ tour. His return made global headlines as Macca-mania swept Japan, with over 5,000 people lining the streets around the venue with press reports claiming the venue shook with the audience reaction! As part of the show Paul performed ‘Another Girl’ for the first time.

The Beatles were the first ever rock band to play at The Budokan, amidst controversy, in 1966, driving the audience wild with a show featuring just eleven tracks.

On New Years Eve Paul made a surprise appearance on Kohaku Uta Gassen to tease his 2017 return to Japan. Amidst the excitement and speculation that followed Paul confirmed the following day that he’d be bringing his ‘One On One’ tour to Japan in April – his first live shows of 2017.

“Hi Japan, I’m back,” Paul announces as a scene of hysteria unfolds at Tokyo’s Haneda International Airport.  It’s 7.46pm and this is the pay-off for the thousands of fans who have been waiting all day to celebrate the return of their much loved idol. Standing in the arrivals area in front of the assembled (and, it must be noted, very orderly) scrum of photographers and video cameras, Paul beams. He is clearly as delighted to be here as his fans are to see him. Two years since he touched down in Osaka on the ‘Out There’ tour, the appetite for McCartney is as strong, if not stronger, than ever. People are screaming and crying, doing all they can in the hope of some direct interaction – and they are not to be let down.

“They Want To Hold Your Hand,” reports the Daily Mail back in the UK, noting that Paul is grabbed by an “overzealous fan … while the star remained perfectly put together, the security unit were quick to jump in to ensure the star remained unharmed”.

Since announcing he would be returning, during the annual New Year’s Eve TV show ‘Kohaku Uta Gassen’ on broadcaster NHK, four months ago, the fans have been gearing themselves up for this moment.

“Looking cool in a black jacket and sunglasses, waving and blowing kisses to the fans, taking time to high-five some of the incredibly enthusiastic crowd of nearly a thousand ahead of his huge Tokyo shows, McCartney’s arrival is a huge national event” –  these aren’t my words but those of Japan’s largest daily newspaper the following morning, and I couldn’t have summed it up any better.

I get the feeling Paul would happily have hung out longer at the airport, but the security team were pretty keen to keep him moving. I’m absolutely buzzing at this experience and I can only imagine what it must feel like for Paul to have such adulation and prompt these scenes. As he is shuffled along into a private corridor leaving the crowds behind Paul, rather overwhelmed by the welcome can only muster: “Oh my goodness, me!”

It only takes a few minutes for video clips of his arrival to be shared on social media, and then the evening news bulletins. Some fans even live-streamed the entire experience. As Paul is travelling to the hotel from the airport he gets to see the huge ‘One On One’ promo truck, with massive video screens and speakers, that’s been driving round the city in anticipation of his arrival. Huge posters are pasted across tall buildings heralding Paul’s return. A delightful welcome to begin a jaunt that will see him complete his 30th solo show in Japan, as well as breaking a record for the most Tokyo Dome performances of this century by an international artist (and all that just on four visits!).

“Hi Japan, I’m Back,” is the headline on many of the front pages which carry news of his latest visit. And as I channel hop in my hotel room a little later I see Paul’s arrival is a big topic of discussion on the breakfast news shows. 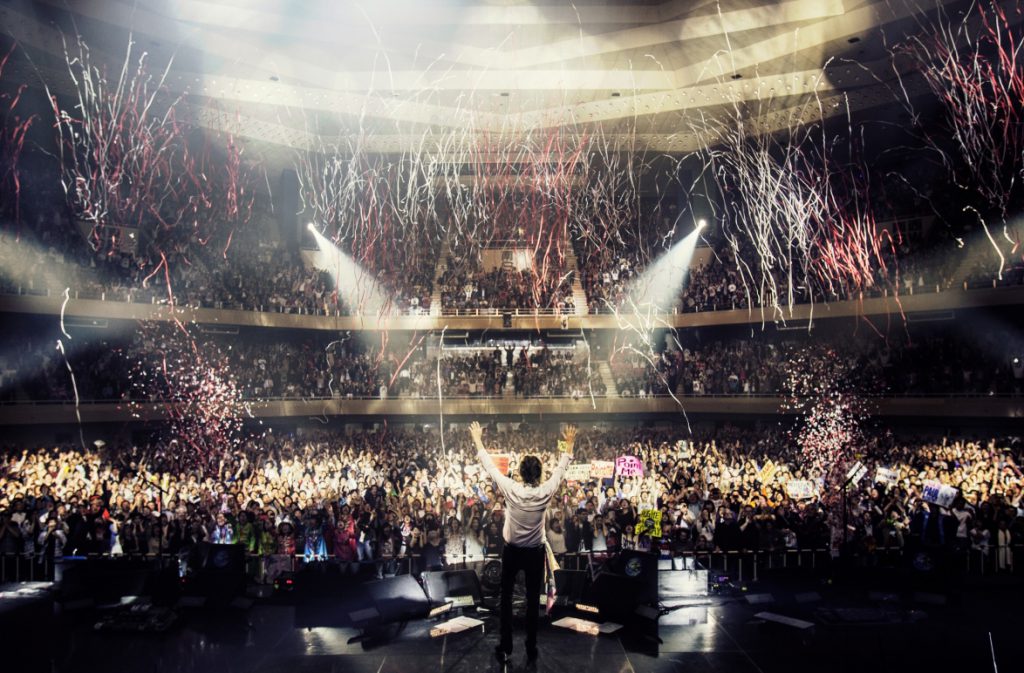 Paul on stage at the Budokan, 2017 – From paulmccartney.com

This was the 7th concert played at Nippon Budokan.

I've Got A Feeling