Paul McCartney will be getting ‘One On One’ with Japan this April – his first set of live dates to be announced in 2017.

Speaking about his forthcoming visit Paul said: “I’m really excited to be taking the ‘One On One’ Tour to Japan. We always have an amazing time there and the audiences have always been so brilliant. We have such special memories from our last trip and we look forward to making many more this time round. Let’s rock Japan!”

His new ‘One On One’ Tour launched in the US in 2016 and saw him play 41 shows across 12 different countries to over 1.2 million people, winning rave reviews from both concert-goers and the media. The final run of shows in 2016 concluded with Paul’s headlining performance at the already now legendary Desert Trip festival in the US.

Since visiting Japan with his sold-out ‘Out There’ Tour in 2015, which involved an historic evening at The Budokan, his new ‘One On One’ show includes a dazzling re-designed production as well as previously never performed classics from the most beloved catalogue in popular music. The ‘One On One’  Tour spans Paul’s entire career – from his earliest work with The Quarrymen through to his most recent collaboration with Kanye West and Rihanna – as well as global treasures from The Beatles, Wings and his solo catalogue – there is no shortage of surprises. […]

[…] Switching effortlessly between the famous Hofner bass, his sunburst and custom-painted Les Pauls and several acoustic guitars, including his Epiphone Texan right-handed model which was flipped to accommodate rock’s arguably most famous left-hander (complete with a Detroit Red Wings sticker), the ukulele and piano, it truly is a joy to see.

His band of merry men are no slouches in the massive talent department either.

You may not know, but Paul’s current ensemble have been playing together for almost twice as long as his first proper band did.

There is veteran of nearly 30 years with McCartney, keyboardist and MD, Paul ‘Wix’ Wickens, Rusty Anderson – erstwhile member of the band Ednaswap, who performed the original version of Torn – on guitars, Brian Ray – former guitarist and musical director to the late and great Etta James – who is equally at ease swapping between guitars and bass, and last but certainly not least, gentle giant and powerhouse drummer, Abe Laboriel Jr. They all provide sweet harmonies and backing vocals.

The mutual respect and sheer love of performing is patently obvious. You can almost taste the camaraderie shared between these five men.

The first of three sold-out shows at the 50,000 seat Tokyo Dome’s audience erupted with deafening screams of delight with each song from probably the greatest ever back catalogue in popular music. A tad Beatle-heavy for this Macca apologist of 35-plus years, but with three dozen numbers from the past 50-odd years, there are no complaints. Paul happily tried to speak Japanese to his fans who lapped it up. When he spoke English, it was immediately translated onto the pair of huge video screens on both sides of the stage. […] 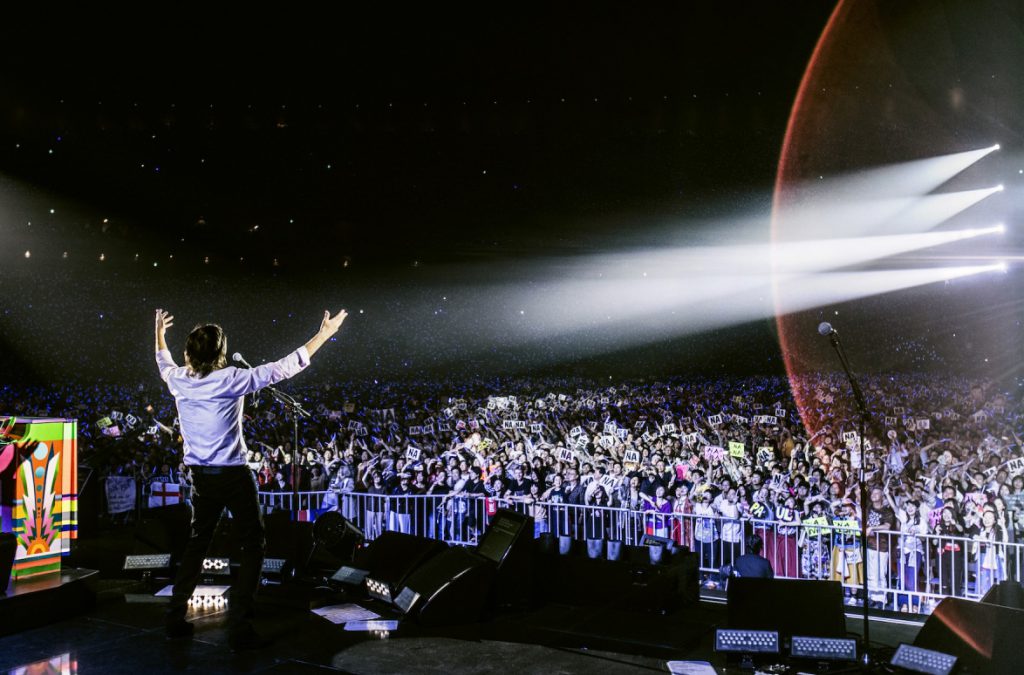 Paul at the Tokyo Dome, 2017 – From paulmccartney.com

This was the 21st concert played at Tokyo Dome.