I’m standing in a bar on the 24th floor of a hotel in Tokyo’s trendy Ginza district at an after-show get together, just hours after watching Paul play his final show to round off an incredible week in Japan. The view of the city from up here is stunning. What’s more, I’m in the enviable and slightly surreal position of chewing the fat (vegetarian, naturally) with the man himself as he reviews the latest run of gigs in his ongoing ‘One On One’ tour, his first live dates of 2017. Paul is happy, relaxed and looking dapper in a navy blue suit and it is sometimes a bit of a pinch-yourself moment to get your head round the idea that this is the same guy who was creating life-long memories for 50,000 people.

Our chat is punctuated pleasantly with crew members, friends and family congratulating Paul on his show tonight and showing him pictures on their mobile phones from the concert – in particular, a surprise which was laid on for him by the audience. Every night is a special night at a McCartney performance, but this was one was exceptional because the fans went the extra mile by coordinating 50,000 blue (there is a ‘One On One’ shade) glow-sticks between them to surprise their hero at the end of the set, as well as projecting messages on the ceiling of the Tokyo Dome for Paul (and everyone in the auditorium) to read. Surprise him, they did. And Paul was visibly moved by the experience.

“It’s like night and day,” he reflects, considering the differences in audiences he has encountered in Japan since his first visit in 1965. Pausing to take a well-earned sip from a margarita, he continues: “Japanese people are very polite and that’s a great thing, but in a rock and roll audience that was always too polite. We thought we weren’t going down very well. At the end of the song there would be this great reception but it would tend to be this polite applause – there was a lot of it, it was great and they did love us, but it was not what we were used to… It was a little bit strange for us. But over the years they’ve got better and better and better, and really gone to party. So, from then to now, I think it’s just the best ever.”

The audience were on their feet for the entire night, which is a big deal here. Crew members who first came here with Paul in the early noughties notice the remarkable difference. Security chief Mark Hamilton tells me that, back then, he could see the fans wanted to get on their feet but were unsure of the protocol. It wouldn’t be until the end of the set that they would all be standing. Well, in 2017, the audience have it sussed and there is no such reserve!

The massive projections on the Dome’s ceiling during the encore read “Thank you Paul”, “Japan loves you”, “Arigato Paul” and “Please come back”. I don’t think it would be too much of a stretch of the imagination to think he will be mulling over another visit because it’s been a week full of high emotions. From his incredible arrival a week ago, through the constant attentions of fans camped outside the hotel and lining the streets around venues, it’s been an incredible adventure.

[…] one of the party asks Paul if he prefers the smaller-scale setting of The Budokan to the enormity of The Dome.

“I loved both,” he answers without even having to think about it. “It’s great to do the big Dome thing because we can fit the full production in, but it’s also great at The Budokan because it’s something different. It feels more intimate, even though actually it is quite a big hall, but, you know, we like to play all different kind of places.” […]

Continuing on his Budokan theme, Paul adds: “It’s a very exciting venue and it has many memories from two years ago – and then the original memories from when The Beatles first played there.”  And it was only this week that Paul added another special Budokan memory to his collection.

Although the venue is much more modest than the mega Tokyo Dome, it’s still an impressive size audience. Many acts would see it as a career peak to play just one night at The Budokan, but in comparison with the enormo-Dome, this is (like Paul says) “intimate” and in terms of production, it was a slimmed down McCartney show. No huge screens or impressive video content that usually accompanies the full show. The result is even more of a focus on the music. […]

Asked by a member of the Japanese team about his week, Paul replies:“It’s been fantastic. Really, from the arrival to this last night, I’ve had a great time, we’ve been lucky with the weather, the fans have been just supercharged – they are just better than ever. The concerts have been knockout, starting with The Budokan. I’ve enjoyed learning Japanese phrases – I never knew how to say ‘Beatles’ but now I do, so it’s been a great laugh. It’s great fun and it’s been great playing the music to all these lovely people.”

And it’s fair to say that, in return, the “lovely people” who have flocked to Tokyo have had a brilliant time too. The mania which follows him, the amazing reviews (“Paul sings his socks off“ and “an energetic master-class of a performance that underlined his enthusiasm for playing live and showed that his exercise regime and vegetarian diet have stood him in good stead” and “another legendary performance” among them, although my favourite headline has been “Paul is God”!) are all very clear signs of this. Paul has given it his all at the shows and the audience has responded in kind. And the massive appreciation has been displayed for not only the songs, the music and the performance but the effort to which Paul has gone to be able to communicate – taking translation sessions before each concert.

“He’s really got a great ear for languages,” one of the translators tells me coming out of his dressing room ahead of one of the Dome shows. So as I head into the dressing room straight afterwards I expect to see Paul studiously poring away over a text book or studiously practising his pronunciation, but instead I find him chilling out watching ABC’s ‘Match Game’, hosted by Alec Baldwin! So if you ever wondered how a megastar prepares for an epic performance… now you know. […] 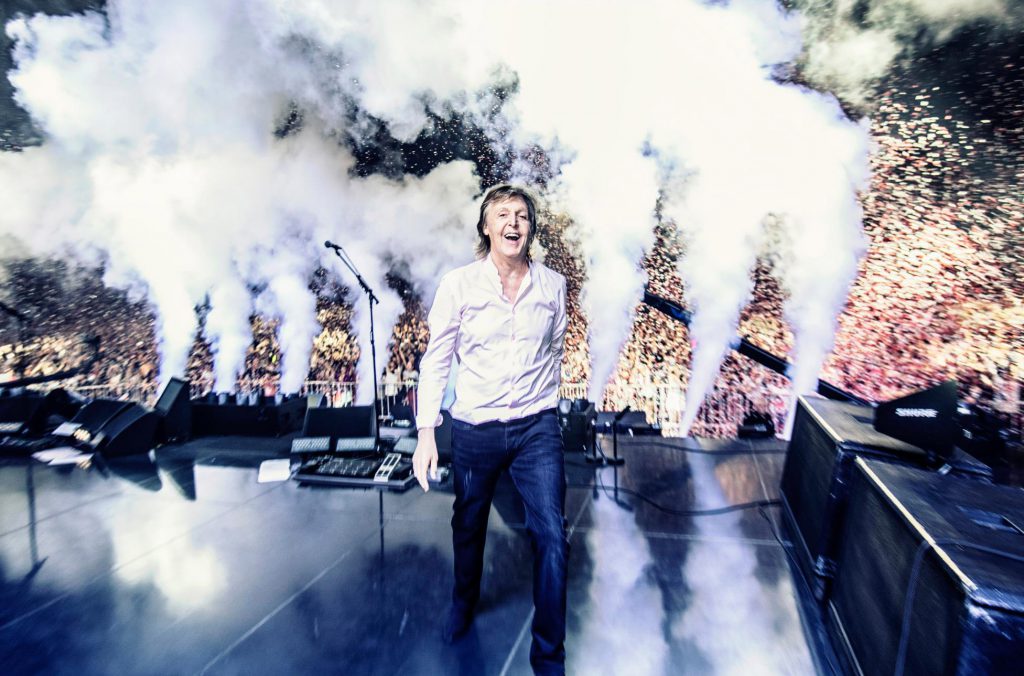 Final night at Tokyo Dome after an incredible week. Thank you Japan! #OneOnOne 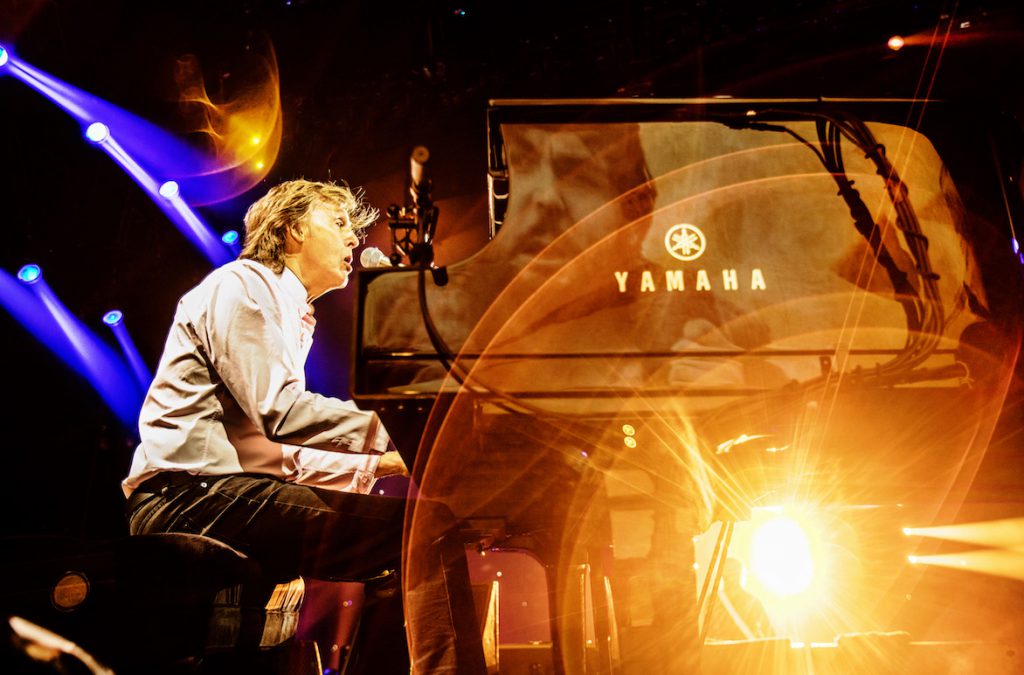 Paul performing during his third show at the Tokyo Dome, 2017 – From paulmccartney.com

This was the 23rd concert played at Tokyo Dome.