The wakeup will come from McCartney’s “US” Tour performance at the Anaheim, Calif., Arrowhead Pond. McCartney plans to play two songs, “Good Day Sunshine” and “English Tea,” for NASA Astronaut Bill McArthur and Russian Cosmonaut Valery Tokarev. This is the first time a live concert will be linked to a U.S. spacecraft.

The call will take place at 12:55 a.m. EST, Sunday, Nov. 13 (9:55 p.m. PST, Nov. 12) as the concert is nearing its end; and McArthur and Tokarev are awakening for the 44th day of their six month mission in space. It will be broadcast live on NASA TV, with video expected of McArthur and Tokarev and audio from both locations.

During his tour, McCartney has paid tribute to the crew of Space Shuttle Discovery’s STS-114 mission, a flight to the space station last summer. On Aug. 9, the Beatles’ classic “Good Day Sunshine” was played as a wakeup call for Discovery’s crew because of a favorable weather forecast for landing that morning.

“I was extremely proud to find out that one of my songs was played for the crew of Discovery this summer,” McCartney said. “In our concert we hope to repay the favor.” McCartney is nearing the end of his 11-week “US” tour.

“Since people were first awakened on the moon by mission control, wakeup songs have been a space tradition to brighten the crew’s day and get them off to a great start,” said astronaut Eileen Collins, who commanded Discovery. “We’re honored that Paul McCartney will be a part of this historic delivery of music for Bill and Valery. It will surely give them a big boost as they continue through their research mission.” […]

“I heard somewhere that to wake up the astronauts in the morning NASA had used ‘Good Day Sunshine’ and I thought, ‘That is so cool, I’d love to do that live’. So then it all got set up with NASA – my tour team talked to them – it was very exciting. We were all very excited!

‘It was really great, and it was super lo-fi. Even though it was an amazingly hi-tech event – to connect us – we were at Anaheim in Los Angeles and there was a lot of cool people at the show! I remember Bob Iger, head of Disney was there. So yeah, it had all been set up and we knew just about when it would be happening in the show. But I had said to our guys, ‘Can you find some way of letting me know it’s 5 minutes to go. You know, like a countdown?’ So they had cards they were holding up! So I knew I could say – with three minutes to go – ‘OK, I tell you what, by the way, have we got a surprise for you! And what I want you to do is, when I say ‘123’ we’ll ALL say good morning to the astronauts!’ And then we’re going to play a couple of songs for them!

‘It was very exciting! And they came through a bit crackly at first (imitates the noise), and then the pictures came through and they did the weightless thing! A little somersault! And I said, ‘That is just so cool! Could you do that again! Could you do the weightless thing again?’ And the audience loved it! It was really special. What a blast it was to do it! To be singing to people somersaulting weightlessly in space!” 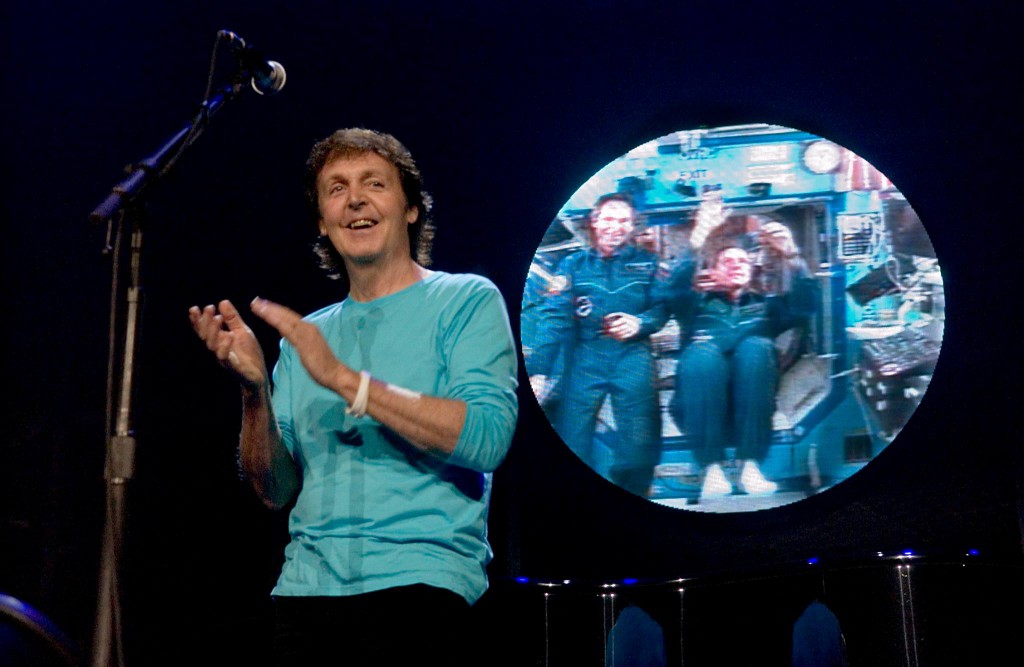 This was the 4th concert played at Arrowhead Pond.

I've Got A Feeling

See song statistics for “The US Tour”