[…] As a 23-year-old Beatle, Mr. McCartney introduced rock to a stadium audience on August 15, 1965, when the Beatles played a 34-minute set at Shea Stadium, which Citi Field replaced. The Beatles returned to Shea in 1966 on what would be their last tour.

Mr. McCartney was also at the final concert at Shea Stadium, joining the headliner, Billy Joel, on stage last year. Mr. Joel returned the favor on Friday night, singing, whooping and splashing piano chords in “I Saw Her Standing There.” In case the Mets weren’t enough, now Citi Field has musical continuity.

On Friday night, Mr. McCartney reminisced about 1965, imitating the muffled and distorted sound the Beatles got through the old stadium’s P.A. system, which by all accounts was drowned out by screaming girls. (Nearly 44 years later, somewhat older women seized their cue to scream.)

He also had other memories: of his fellow Beatles John Lennon, to whom he dedicated his memorial song, “Here Today,” and George Harrison, who had given him the ukulele he used to play Mr. Harrison’s song “Something.” He dedicated the ballad “My Love” to his late wife Linda, who sang with Mr. McCartney’s band Wings in the 1970s; she was part of the video backdrop when Mr. McCartney played “Band on the Run.”

The Citi Field audience brought its own memories: Beatles T-shirts and talismans, held aloft to soak up the occasion. When Mr. McCartney sang Beatles songs, in arrangements that nearly replicated the studio versions, there were loud, fond sing-alongs.

But Mr. McCartney wasn’t fixated on looking back. Although he has enough hits to fill his two-and-a-half-hour set with oldies from Wings, the Beatles and his solo albums, he chose to stay current as well, stumping the nostalgia crowd with songs from the album he released in 2008 as the Fireman, “Electric Arguments.” At 67, he is still a vigorous musician: writing tuneful and wily songs, playing assorted instruments, crooning his ballads ardently, hitting the high notes and howling like a rock and roller. […] 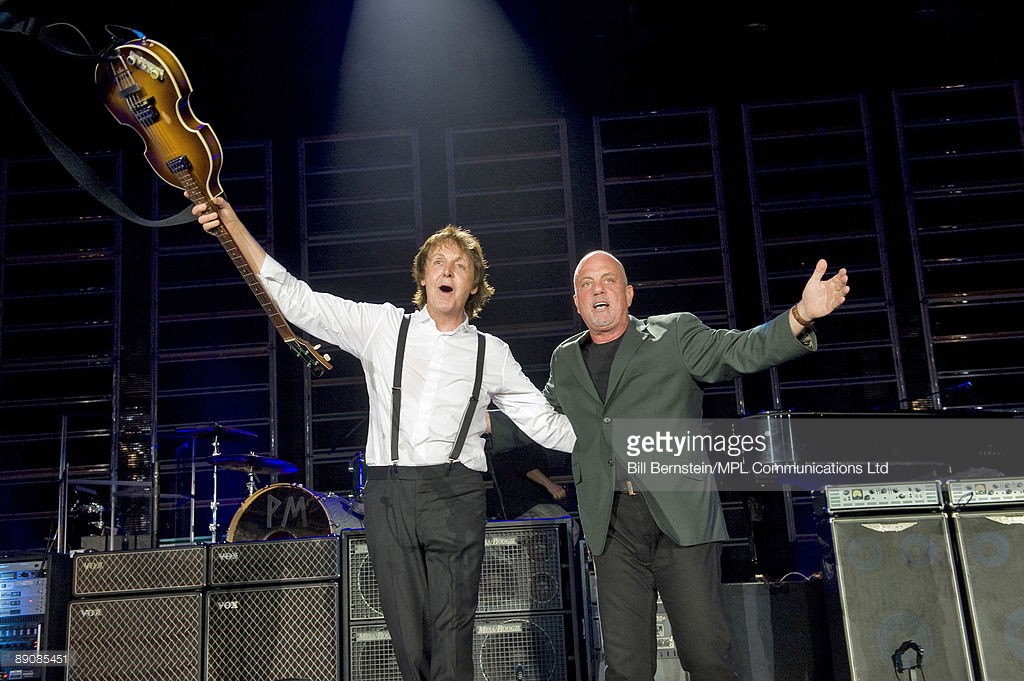 Sir Paul McCartney performs as part of Summer Live ’09 at Citi Fields on July 17, 2009 in New York City. He is joined by Billy Joel and perform ‘I Saw Her Standing There’.

This was the 1st concert played at Citi Field.

A Day In The Life