The Red and Blue albums were compiled and released in the spring of 1973, a year when the legend of The Beatles was even bigger than it had been when the group was together.  Three years after the break-up, all four former Beatles were enjoying enormous solo success.

Less greatest hits collections than surveys of The Beatles’ high points, the two double albums became essential introductions for fans who came aboard after The Beatles broke up.  For millions of music lovers born after the mid-fifties, these have been and always will be where The Bealtes experience begins.

Also, by 1973 it was becoming clear that the breakup of The Beatles was not going to be, as many had believed, a temporary thing.  There was still widespread hope that they would reunite at some point, but their continued success as solo artists made it apparent that the four former Beatles were serious about going their separate ways.  The Beatles had never had a career spanning Best-Of or Greatest Hits – in a very real senses all of their LPs were Greatest Hits albums.  They had more hit singles that could fit on even a double album, and to complicate things, some of the group’s most important songs – “A Day In The Life”, The Fool On The Hill”, and in England even Yesterday – were not released as singles.

The Red and Blue albums had to tell The Beatles’ story in limited time, necessarily leaving out many big songs while conveying a sense of the whole history of the group.

The Red and Blue albums do a  superb job of condensing a rich and complicated musical journey into four discs that move easily through a range of styles.  Through all the changes we always feel at home – because we are in the company of John, Paul, George and Ringo.  They never let us down.

1962–1966 (also known as “The Red Album”) is a compilation album by the English rock band The Beatles, spanning the years indicated in the title.

The album was compiled by Beatles manager Allen Klein. Even though the group had had success with cover versions of songs, most notably with “Twist and Shout“, which made number 2 on the Billboard charts, only songs composed by the Beatles were included. Along with its 1967–1970 counterpart, it compiles every single A-side released by the band in the UK.

As with 1967–1970, this compilation was produced by Apple/EMI at least partially in response to a bootleg collection titled Alpha Omega, which had been sold on television the previous year. Print advertising for the two records made a point of declaring them “the only authorized collection of the Beatles.”

For the group’s 1963 debut LP Please Please Me, photographer Angus McBean took the distinctive colour photograph of the group looking down over the stairwell inside EMI House (EMI’s London headquarters in Manchester Square, now demolished). The cover for the 1963 EP The Beatles (No. 1) used a picture from the same shoot.

In 1969, the Beatles asked McBean to recreate this shot. Although the 1969 photograph was originally intended for the planned Get Back album, it was not used when that project saw eventual release in 1970 as Let It Be. Instead, the 1969 photograph, along with an unused photograph from the 1963 photo shoot, was used for both this LP and the cover of 1967–1970.

The inner gatefold photo for both LPs is from the “Mad Day Out” photo session in London on Sunday 28 July 1968.

The album cover was designed by Tom Wilkes.

The British and American versions of the vinyl album contain notable differences; for example, “Help!” on the American edition includes the same pseudo-James Bond intro as the mix found on the American Help! soundtrack LP, while the same song on the British edition does not. Also, the British LP uses the stereo “whispering intro” mix of “I Feel Fine“, while the US LP uses the mono mix from Beatles ’65, which is drenched in additional reverb. (See Mix Variations below.)

The first compact disc version was released on 20 September 1993. It was released on two discs for the price of two albums, though it could have fit on to a single disc; EMI stated that this was done to match the release of 1967–1970. The CD version used new digital masters. The first four tracks on the CD release are in mono; the rest of the tracks are in stereo. The tracks “All My Loving“, “Can’t Buy Me Love“, “A Hard Day’s Night“, “And I Love Her” and “Eight Days a Week” made their CD stereo debut with this release.

EMI announced on 10 August 2010, that the album had been remastered for a second time and, once again, would be released as a two-CD package. The album was released worldwide on 18 October 2010, and 19 October 2010 in North America.

The album was reissued on 180 g vinyl in 2014, prepared from the original UK 1973 compilation master. The fake stereo mixes of “Love Me Do” and “She Loves You” were replaced by the true mono versions. 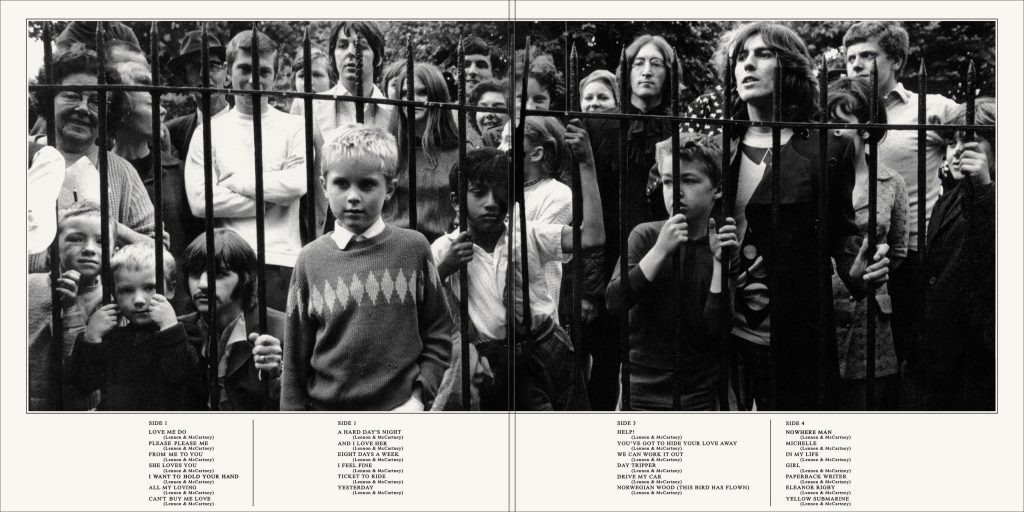