See all concerts in Belgium on the map

[…] With 36 of Werchter’s 75 acts being British, including Thursday headliner Paul McCartney, Friday headliner Editors and Sunday’s top billing, Florence + the Machine, many also took the opportunity to address the UK’s voting to leave the EU on 23 June. Richard Hawley said he and his band are “of Sheffield, we are English and we are European and proud”, while PJ Harvey mourned that “England’s dancing days are done” and Ricky Wilson of the Kaiser Chiefs managed a quick, “Sorry about that Brexit, by the way!”.

IQ previously reported that Werchter, promoted by festival founder and Live Nation Belgium head Herman Schueremans, was along with other Belgian festivals suffering a slowdown in ticket sales as foreign visitors stayed away following the bombings, even with thorough bag searches designed to put visitors’ minds at ease. The final attendance figures were down 4,500 on last year, with the number of weekend tickets falling 67,500 to 60,000 but day tickets growing from 82,000 to 85,000 (for 145,000 visitors in total – still the festival’s third-best visitor total since it began).

Even with the slight fall in sales, Schueremans tells IQ he was happy with this year’s event – Rock Werchter’s 42nd – “despite the weather”. The festival was one of the wettest on record, with the site flooded beforehand and heavy rain throughout the weekend, forcing Schueremans and his team to bring in more than 5,000 tons of sand and 20.000m³ of bark to dry out the site.

Rotselaar mayor Dirk Claes praised the promoter for his handling of the flooding. “Due to the inclement weather and the terror alert, this edition of Rock Werchter was, of the 22 I’ve been [been mayor for], the toughest to organise… […]

We’ve come to the last European ‘One On One’ show of this run and Paul’s second festival of the year. Tonight Paul is headlining the opening night of Belgium’s Rock Werchter.

It will barely come as any surprise if I tell you that as we arrive at around 5pm, it is raining once again. We were quite worried about the volume of the downpours because there is, in the words of Paul’s 2005 song, ‘Too Much Rain’. One of the first familiar faces I see is Kaiser Chiefs’ Ricky Wilson who has just performed. He is hanging around the backstage area and asks if the big man is on site. He is a little disappointed when I explain Paul is due later because Ricky has to jet off somewhere else, so he wants me to pass on his regards. He had recently done an interview in which he was asked, “Who is the most famous person you’ve met?” the answer was of course “Paul!”.

Ricky went on to explain how hard it is to describe to people, just how good Paul is at putting you at ease instantly when you meet him. It’s always nerve-racking to meet a hero, but he knows the score and always tries to make the experience comfortable and normal (well, as normal as it can be!), although most people will be forgiven for finding it pretty surreal. I know I still have to pinch myself occasionally.

Around 6.30pm, about the same time that Paul’s plane is landing, you can probably guess what happens – the rain stops and out comes the sun. DJ Chris reminds us: “It’s the McCartney effect.” By this stage, we are keeping everything crossed that the rain will hold off although, frankly, the festival-goers are beyond caring about the weather. They are having the times of their lives regardless.

Half an hour later, Paul is with us and heads over to his dressing room. Ahead of his regular translation session, fellow performer Ellie Goulding pops by to say hi to Paul and asks to have a photo taken with him.  She will later witness the entire set from the side of the stage, singing along as well as joining the crew in a line-up to give Paul a celebratory high-five as he heads off to jump on the tour bus.

Having to follow an act of Paul’s stature can be a pretty daunting task for some acts. As Belgian website De Redactie puts it: “All the bands performing the following days at Rock Werchter will have to do their very best because Sir Paul McCartney has played the best concert of the festival already. Fifteen minutes later than planned, the former Beatle started his set with A Hard Day’s Night.”

Indeed, also watching from side of the stage is one of the boys from Disclosure who are to DJ after Paul’s set. “How on earth are we meant to follow that?” he wonders out loud.

Needless to say the show goes down well with everyone and the reviewers are gushing. De Morgen says: “Macca refrained from flexing his muscles and the sort of bellowing-power sound which the typical festival act goes for. No deafening volumes, no bouncing around the stage, no aggressive performance or ego trip, let alone false modesty.”

Het Laatste Nieuws reckons: “The biggest act at Werchter ever. Flanked by a 24-carat band, Paul McCartney gave the rained-out park a real live Beatle for the first time. ‘It’s Been a Hard Day’s Night …’ – nobody could summarise the day any better. Paul McCartney – who just turned 74 – proved that his repertoire remains invincible, even in miserable circumstances. He struck the first chord of ‘A Hard Day’s Night’ and Werchter broke out in collective goose pimples. Werchter will continue to reverberate from this living legend for a long time.” 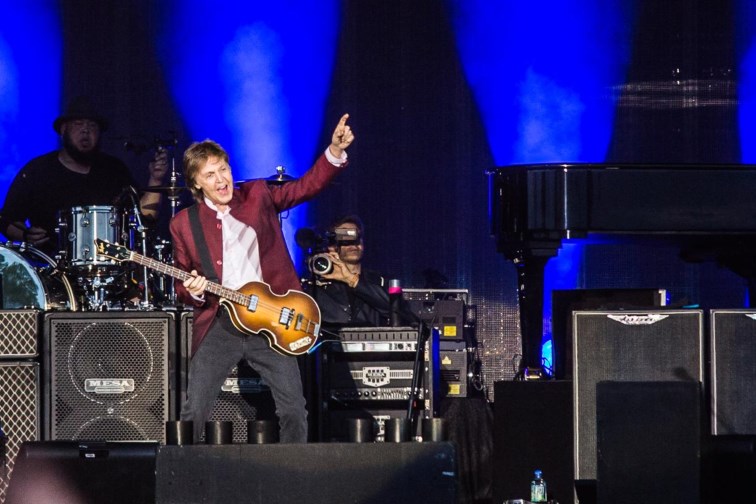