This once-in- a-lifetime concert will take place in Indio, California on October 7, 8 and 9 when six of the world’s most iconic and influential rock and roll artists come together for Desert Trip.

With performances starting after sunset, each artist will play a full set, serving up three incomparable nights of rock ‘n roll. Located at the home of the critically acclaimed Coachella Valley Music and Arts Festival this is the only time and place to see this incredible lineup. […]

[…] The event is the result of a year of secret meetings and careful negotiations by Paul Tollett, the CEO of concert promoter Goldenvoice. For the past 17 years, Tollett has staged the Coachella Music & Arts Festival, also held at the Indio, California, site, which has made its reputation with high-profile reunions like the Pixies, Rage Against the Machine and Guns N’ Roses. […] Two years ago, Tollett made a wish list that he says consisted only of the six acts. He traveled to see each one play, and he sold them on the idea slowly. “If I’d made a financial offer first, I would have been rejected,” he says. “[The Stones] asked what I was working on. I said, ‘I’m working on one of the greatest shows of all time. I don’t know what that means, but I’ll come back to you.’ ” The biggest challenges included getting the first act to sign on (Tollett is not saying who it was). “A couple said, ‘What are you going to do if we don’t do it?’ [I said] ‘If we don’t get these six, we’re not going to do the show.’ They said, ‘OK, that’s kind of interesting.’ ” The only act Tollett has not met with personally is Dylan: “I live out near him, but he’s not the type of guy you run into at 7-Eleven.” It’s been reported that acts are receiving upward of $7 million per set. “They’re all getting what they’re worth,” says Tollett. […]

Paul McCartney has learned a few important things about his fans, and there were more than 70,000 in front of him Saturday on the second night of the Desert Trip festival in Indio, Calif. He has come to a profound understanding of the Beatles legacy, its connection to his solo career and the emotional resonance it has continued to have for generations of listeners for more than 50 years.

Like his 2009 headlining appearance at Coachella, McCartney arrived at Desert Trip prepared to connect not only with the most hardcore who travel across state lines to see him over and again but with other fans who are deeply connected in other ways. One of night’s emotional peaks came late Saturday when McCartney brought out Neil Young, returning from his own explosive performance earlier the same evening.

Their choice of material was the Lennon-McCartney classic “A Day in the Life,” which later shifted into John Lennon’s anthem “Give Peace a Chance.” Both McCartney and Young were all smiles sharing the stage, then tore into the raw Beatles oddity “Why Don’t We Do It in the Road?” leaving room for Young to set his guitar aflame with a joyfully ragged solo, a searing moment likely to be remembered long after this weekend. […] 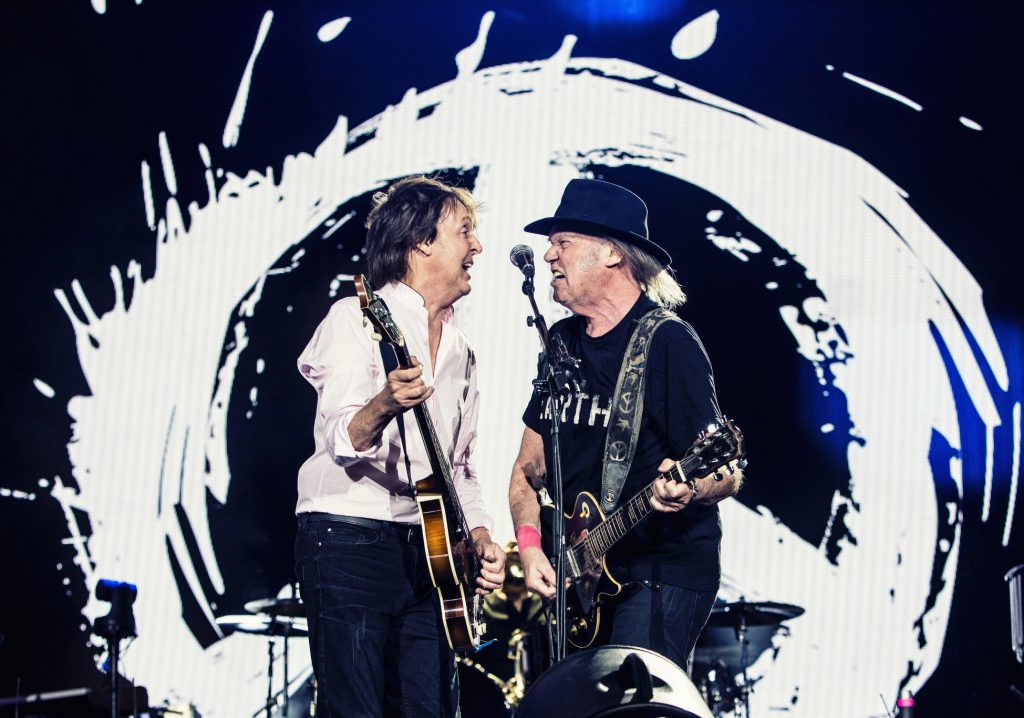 From Twitter – Me and Neil Give Peace A Chance. What a Desert Trip! #DesertTrip #OneOnOne

This was the 1st concert played at Empire Polo Club.