After the long and winding road to get a new Sacramento arena built, Golden 1 Center received its proper coronation on Tuesday night. And that fanfare arrived via the opening notes of “A Hard Day’s Night,” a clang of a chord that not only kicked off Paul McCartney’s nearly three hour set but inaugurated a new era of Sacramento concert-going.

By the multicolored glow of the $8 million Piglet sculpture in the plaza, some 15,500 people passed through Golden 1 Center’s doors to witness a member of rock ’n’ roll royalty at the new home of the Sacramento Kings. McCartney appearing in Sacramento isn’t necessarily new – he performed at Arco Arena in 2002 and 2005 – and any time the former member of the Beatles comes to town with his decades-long songbook is a Big Deal. But this show took on an extra level of excitement and significance with Golden 1 Center activating for the first time as a concert facility.

As McCartney arrived on stage in black jeans and a trim blazer, the roar was that of the Kings advancing to the NBA Finals on a buzzer-beater shot (which, by the way, would be a welcome turn of events for the team). The mood stayed upbeat throughout the show, so much that it was the rare classic rock show where Baby Boomers weren’t moaning en masse for people to sit in their seats – at least, such was the case on the floor.

Even better, Sacramento finally has an arena with decent sound. Any memories of “Echo Arena,” as local concertgoers often referred to the cavernous sounding Arco Arena, faded quickly as McCartney and his lean, four-piece backing band wound through more than three dozen songs. The level of clarity and balance in Golden 1 Center’s sound system was welcome after so many years of muddy sounding music at the Kings’ former arena. McCartney’s guitar fingerpicking in “Blackbird” was especially resonant, and the overall band sound in more rocking tunes like “Live and Let Die” and “Birthday” was punchy without veering into the bombastic.

Bigger tests of Golden 1 Center’s acoustics will come later, once the arena hosts heavy metal bands with jackhammer guitar riffs and hip-hop acts that thrives on deep bass. But for now, McCartney was an apt way to break in the sound system.

After all, McCartney’s music covered a range of styles and moods, such as a somewhat torchy take on the Beatles’ “Here, There and Everywhere” and the proto-techno sound of “Temporary Secretary,” a deep cut from 1980’s “McCartney II.” McCartney’s set overall covered nearly 50 years of music, from McCartney’s pre-Beatles days in The Quarrymen (1958’s “In Spite of all the Danger”) to “New,” a jaunty 2013 solo track that sounds like it’s going to break into “Penny Lane.”

The unintended downside of a high-tech sound system is that it can also highlight flaws. McCartney’s voice showed a slight creakiness in some moments, such as the “oooohs” in “Here Today,” and he doesn’t quite hit the growling high notes in “Maybe I’m Amazed” like he used to, especially in the chorus.

But at 74, McCartney still showed all the charm and musicianship that makes him among the most revered performers in pop music history. Tuesday’s show featured an especially fresh McCartney given that his last performance was Aug. 18 in Cleveland.

McCartney remained chatty and engaged throughout the set, as he sometimes danced in place between tunes and joked with fans who yelled out their devotion to Sir Paul. But most of the magic was in the music, including the hymn-like “Let It Be” or McCartney’s tasty electric guitar licks during the Wings song “Let Me Roll It.” The arena erupted into a giant “na na-na na” chorus during “Hey Jude,” and people danced in their seats during “Love Me Do” while trying not to spill $13 beers.

And in the end, this was just the beginning for Golden 1 Center. 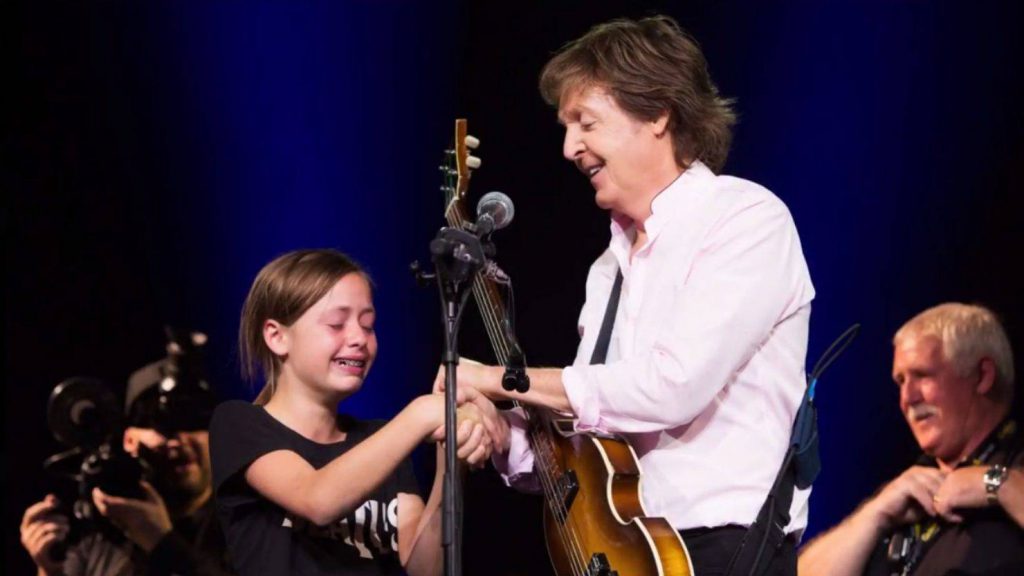 This was the 1st concert played at Golden 1 Center.