But so many of the former Beatle’s best-loved songs are healing anthems of love and peace, that he didn’t have to change anything, to give emotional solace on a day with much troubling news.

First, he came out strong with the upbeat “A Hard Day’s Night.” When his voice booms out “When I’m hoooome” in that lyric, it’s hard to detect much change from 1964.

Then’ after the more recent “Save Us,” McCartney obliquely addressed Monday’s tragic events — the Las Vegas shootings, and Tom Petty’s sudden illness (and now, death).

“Even though this has been a sad day, we’re going to celebrate the joys in life,” said McCartney, 75, to cheers. Then the most famous bassist in the world and his four-piece combo kicked into “Can’t Buy Me Love,” from the Beatles film “Hard Day’s Night.”

Someone on the McCartney team is cracking the social media whip, because shortly after he said those words from the LCA stage, it was tweeted from @paulmccartney.

“Let it Be” had particular resonance, with its call to “mother Mary” —  meaning both the mother of Jesus, and Paul’s own mother Mary, who died when he was 14 — seeking words of wisdom, and finding the answer, “let it be.”

And it felt perfect that he ended the apocalyptic, somber “A Day in The Life” (just added to his shows recently, “in light of current events,”) with a bit of chant from John Lennon’s “Give Peace a  Chance.”

“All we are saying, is give peace a chance,” McCartney sang, as several fans toward the front waved signs with red hearts, lettered “Las Vegas.” […]

(On October 1st night, 59 people were killed in the deadliest mass shooting in modern US history, when a gunman opened fired on an open-air music festival, in Las Vegas) 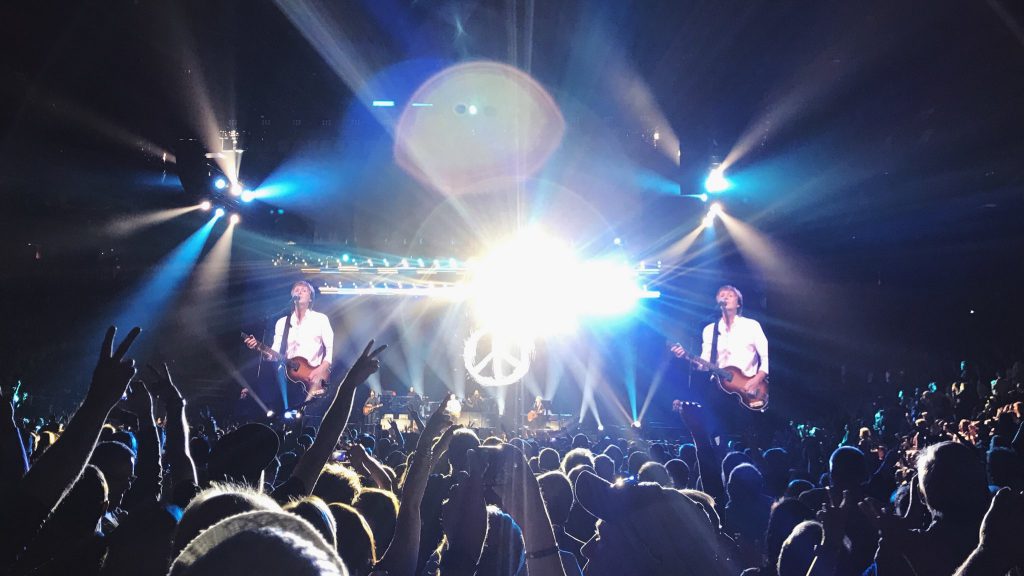 From Twitter – What a night! Thank you for two amazing concerts, @PaulMcCartney. #OneOnOne

This was the 2nd concert played at Little Caesars Arena.