If ever there was a case for more concerts downtown at Busch Stadium, it was the magical night of music that was Paul McCartney’s sold-out concert Saturday night.

That’s just how perfectly the evening went from the choice of artist to the setting to the weather, making for a memorable night for the 41,000 fans packed into the venue.

McCartney’s “One On One” tour, the fastest-selling concert in the history of Busch Stadium, was a parade of some of music’s most treasured songs hand-delivered by one of the masters.

Sure, new songs were thrown in to show he’s more than just an oldies act. There was the 2015 hit “FourFiveSeconds,” which McCartney recorded with Rihanna and Kanye West, though it might’ve left some of his core fans scratching their heads. Also new was, well, “New,” “Queenie Eye,” and “Save Us.”

But it was the undeniable classics performed here, like “We Can Work It Out,” “Love Me Do,” “Eleanor Rigby,” “Yesterday,” “Live and Let Die,” “Back in the U.S.S.R.” and “Band on the Run,” that gave the warm feeling of revisiting longtime friends.

McCartney walked out on stage at the top of the show with his guitar held high above his head in a triumphant pose before kicking off the night with “A Hard Day’s Night.” There was so much more to come during the show that ran well over two hours in its offering of 38 songs. Material from the Beatles continues pulsating with life, and numbered over 20 songs in the concert.

[…] The concert was promoted as a celebration of the Beatles’ 1966 concert at the old Busch Stadium, though McCartney never mentioned that fact from the stage.

Just before disappearing within a mass of smoke and confetti, he gave a shout out to Chuck Berry and promised to see fans next time. 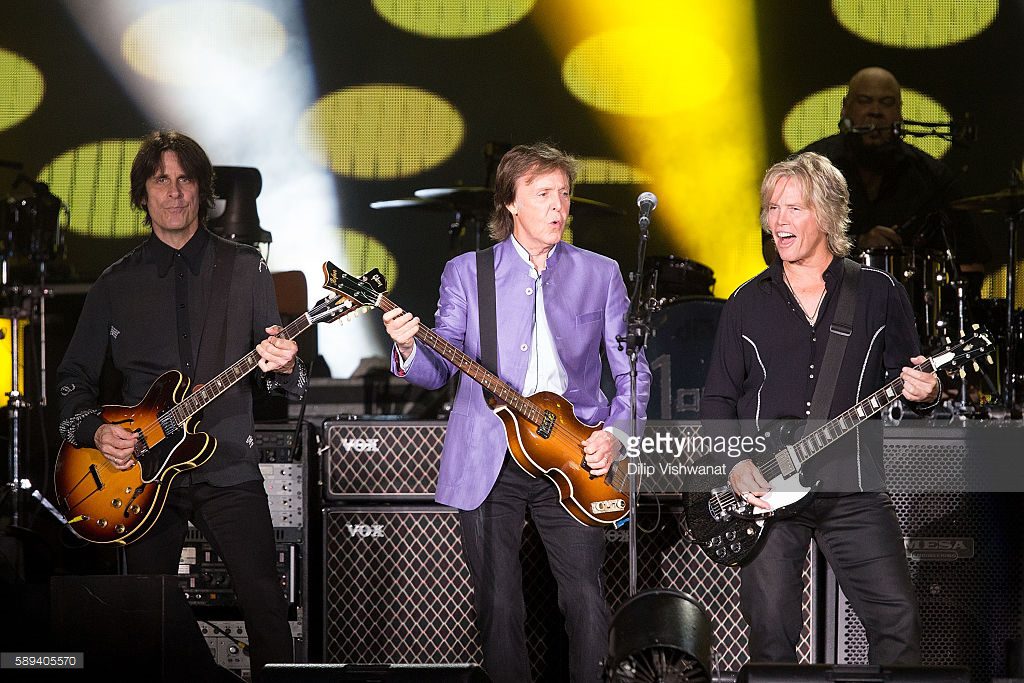 Rusty Anderson, Sir Paul McCartney and Brian Ray perform during the One On One Tour at Busch Stadium on August 13, 2016 in St. Louis, Missouri.

This was the 3rd concert played at Busch Stadium.

The Mrs. and I attended this concert. What a great view of the stage with the St. Louis skyline, including the Gateway Arch looming behind it. The clouds that hovered over the city all that day and during the concert, gave a strong impression that we were going to get a cartload of rain. It never did. A wonderful night we'll both remember, the rest of our lives. Keep rockin' Sir Paul. Hope to see you in St. Louie in 2020. It would be a great way to start the decade.

Thanks Victor for sharing your memories !