During Paul McCartney’s long-awaited Tampa return Monday night at Amalie Arena, he addressed his last visit early on — a 2005 concert where he fell down a hole in the stage, briefly causing real alarm.

The crowd at the sold-out show surely felt the same way, as McCartney delivered a nearly three-hour, 40-song set of solo, Wings and of course Beatles songs with nary a stumble.

The setlist spanned “In Spite of All the Danger” by ’50s proto-Beatles group The Quarrymen to his 2015 Rihanna and Kanye West collaboration “FourFiveSeconds.” One moment, he’d sing “Blackbird” with nothing but his acoustic guitar, then play “Live or Let Die” as a huge stadium song with explosive bursts of fire.

Over the three hours he switched between various guitars and pianos, and even performed a sweet version of “Something” with a ukulele given to him by its songwriter, former Beatles bandmate George Harrison. Though McCartney’s voice has held up sufficiently, he was backed by a four-piece band more than capable in assisting him with vocal harmonies.

Throughout, McCartney displayed a cheerful, cheeky (literally, in the case of a rump-shaking dance during “And I Love Her”) that reminded why he was once known as “the cute one.” When he brought a woman dressed in a Sgt. Pepper’s uniform and her young son from the audience onstage during “Get Back,” she couldn’t resist giving him a kiss.

At 75 years old, McCartney takes his time, giving lengthy introductions including stories about The Rolling Stones and Jimi Hendrix before going into “I Wanna Be Your Man” and a taste of “Foxy Lady.” And though there were beloved songs throughout, no one who puts the 1980 electronic curio “Temporary Secretary” early in his setlist can be accused of purely playing the hits.

But by the backside of the show, there was nothing left but McCartney’s blockbuster songs such as “Let It Be,” “Band on the Run” and “Hey Jude,” a song whose closing chant was made for stadium singalongs. And a truly essential encore showcased McCartney’s finest Beatles work, such as “Yesterday,” the title track of “Sgt. Pepper’s Lonely Hearts Club Band” and a mini-“Abbey Road” medley of “Golden Slumbers,” “Carry That Weight” and “The End.”

There couldn’t be a better finale for a McCartney show — his greatest Beatles moment in the medley and a song called “The End” and the lasting advice “the love you take is equal to the love you make.” 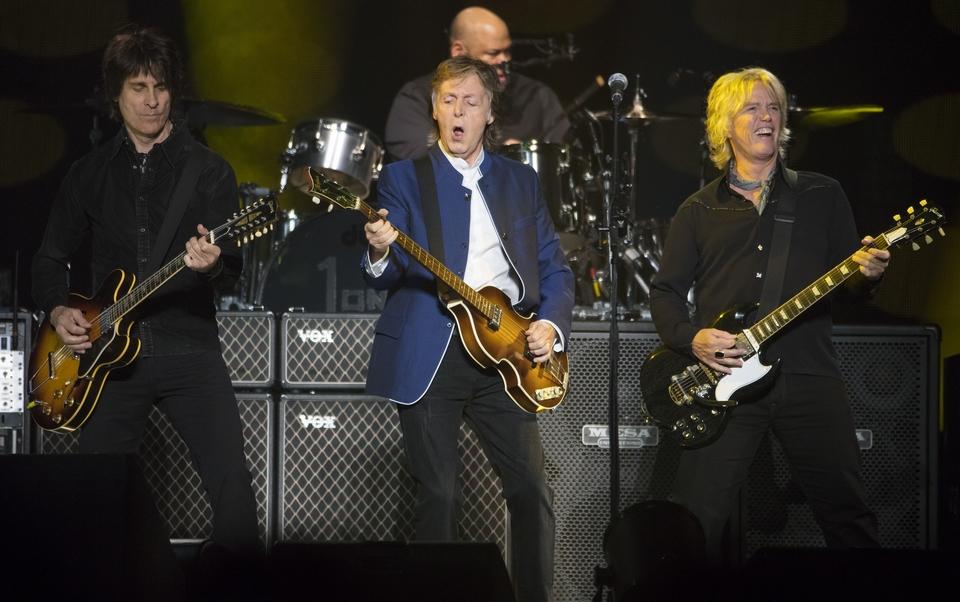 This was the 1st and only concert played at Amalie Arena.