See all concerts in Australia on the map

Performing in stadiums and arenas in Perth, Melbourne, Brisbane, Sydney and Auckland, this will be Paul’s first Australian and New Zealand tour since 1993’s ‘The New World Tour’ more than 24 years ago.

Paul said of the announcement;

“We’ve been waiting to get back to Australia and New Zealand for years and now it’s finally happening.  It is very exciting.  I’m really looking forward to the concerts as we’ve always had such a brilliant time whenever we’ve been before so we know we are in for a treat.  Can’t wait to see you and all rock out together.”

Do you have any favourite memories from visiting Australia and New Zealand on previous tours?

“Thanks for your question, Charles. Yes! The welcome we got in Australia was crazy! Crazy good! People were lining the streets and it was really special. We really liked it a lot and were very pleased to get such a great reception. A funny memory was that we were always giving the thumbs up sign to everyone, you know, meaning ‘Great, thanks, good luck’. And then someone said, ‘No actually that’s a rude sign in Australia’. I’m still not sure to this day if it’s true, but I think it meant something like ‘the finger’ in America. And there was another crazy incident where one of the fans climbed up the outside of our hotel to get to our suite. That was pretty crazy and pretty dangerous and don’t do this at home! But yeah it was a great trip. And in New Zealand rubbing noses with the Maoris had to be a little high spot.”

Was it just you and the guys [The Beatles] who went up and did that for the day?

PM: Yeah, there was a little ceremony where the Maoris were giving us a presentation and they were doing the dance and all the stuff. It was just nice to meet some real Maoris and then you know they said they’d like to greet you, and you do the nose, which was cool!

[…] The Liverpudlian hasn’t performed in Perth since 1993 and it was evident he’d picked up new fans in the intervening years with audiences spanning several generations.

“How you goin? It’s fantastic to be back. I get the feeling we are going to have a good time tonight.”

[…] Swapping his bass for a red Les Paul guitar, he launched into Wings track Let Me Roll It with a robust Foxy Lady outro.

He said the band always play the outro “as a tribute to the late great Jimi Hendrix” who opened a concert with Sgt Pepper’s Lonely Heart’s Club Band two days after the album was released.

His colourful stories about his rock star mates were almost as entertaining as his music.

He also showcased his versatility as a musician switching from bass to guitar and then to piano for a rousing version of Wings’ Nineteen Hundred and Eighty-Five and Maybe I’m Amazed, to acoustic guitar for I’ve Just Seen a Face.

McCartney began his world tour in April last year and by the time it ends, in New Zealand on December 16, he will have performed 78 shows to more than two million fans in 16 countries.

Today Paul is moving from the rehearsal stage at the Regal Theatre to the massive stage at the NIB Stadium (it stands for Newcastle Industrial Benefits, in case you are wondering). It’s hot today but it’s windy (the breeze is referred to locally as the Freemantle Doctor) and we are joined at rehearsals by highly-respected Australian broadcaster Leigh Sales and her crew from leading flagship weekly cultural show ABC 7:30. Leigh’s here to get a backstage tour and chat to Paul during rehearsals about being back here after 24 years.

Leigh has interviewed many cultural icons, world leaders and celebrities but today is her dream interview and after their chat she wrote a lovely piece entitled “Interviewing your heroes can have its pitfalls, but Paul McCartney avoids them all” – and here is an excerpt…

“We then went around backstage and Sir Paul arrived to start rehearsals. I stood in the wings watching as he and the band played ‘Another Girl’ and then ‘Day Tripper’. When the opening riff for ‘Day Tripper’ started, I looked at my producer, Callum, and said, “Oh my god,” with tears in my eyes. It was absolutely thrilling to stand in the wings and watch Paul McCartney practice that. The band finished rehearsing and as I chatted to the crew, I turned around and Sir Paul was about a metre away, walking towards us. He came and introduced himself and shook everybody’s hand. For almost 60 years, he’s had starstruck people standing in front of him, so he’s very adept at putting everyone at ease and being warm and charming. We went on stage and did our interview together. He was delightful and interesting. He has lovely kind eyes and a gentle way of speaking. I was so happy to see that I was going to walk away with my admiration of him enhanced. “Sir Paul,” I said at the end of the interview. “I’ve been very fortunate in my career that I’ve had the chance to interview world leaders, like Aung San Syu Kii and the Dalai Lama, every celebrity you can think of, Elton John, Patti Smith, but I’ve never interviewed somebody of whom I’m a bigger fan than you. “Oh, luv, give us a kiss, come on” he replied and he kissed me on the cheek and gave me a hug. Every time I listen to a Beatles song now, I’ll remember the incredible experience of getting to meet Sir Paul in person and what a beautiful soul he was. It was one of the greatest experiences of my life.”

With the interview complete, Paul then begins work on what will be one of the big surprises on this tour. The Western Pipe band join him to perform ‘Mull Of Kintyre’, which as I write is celebrating the 40th anniversary of hitting number one in the UK and many other countries.

Five weeks since Paul’s last ‘One On One’ concert in Mexico City and 24 years since his last show on Australian soil, the day has finally arrived. It’s a beautiful, hot sunny day with clear skies – and blissfully, there is no sign of the Freemantle Doctor. It’s funny to think about how much has happened since that last visit. Paul has released eight solo studio albums – and won the same number of Grammys; he has performed over 500 shows since his 1993 visit, which equates to almost 22,000 live songs. Back then, we didn’t even have DVD and our world – and concert-going – has changed immeasurably with the advent of Google (1998), camera phones (2000), Facebook (2004), YouTube (2005), and the iPhone (2007)!

Regular readers of the tour diary will know that Paul loves to make the effort to learn a little of the local language wherever he tours. Even in Australia that proves to be true when, straight after ‘Junior’s Farm’, he hollers to the crowd: “G’day Perth.”

It is a show full of hits with tracks like ‘Can’t Buy Me Love’, ‘Love Me Do’, ‘Let Me Roll It’ plus much, much more. And, of course, ‘Mull Of Kintyre’ goes down wonderfully. Paul always loves to have a little audience participation and tonight’s show features an onstage proposal.

Just before midnight the first review drops online. I will leave it to The Sunday Times to tell you what you need to know: “MACCAMANIA gripped Perth as Paul McCartney kicked off the Australian leg of his One On One world tour at a sold-out NIB Stadium.” Another headline reads: “Paul McCartney Surpasses Expectations As Aus Tour Kicks Off”.

And with, that we are up and running in Australia. 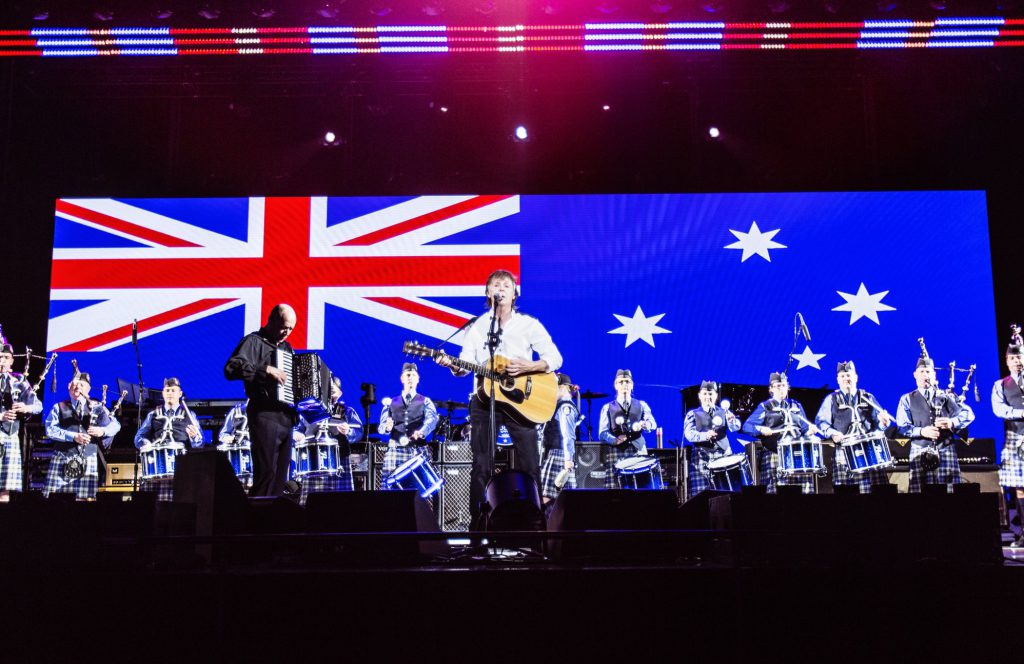 This was the 1st and only concert played at nib Stadium.