See all concerts in Mexico on the map

“Mexico holds so many special memories for me. We’ve had some brilliant nights there and I’m looking forward to making more great memories on this tour. We are going to have a huge party together. Getting ready to rock Mexico!”

On October 9th, a couple of weeks after a 7.1-magnitude earthquake hit Mexico City, Paul published the following message on Twitter. 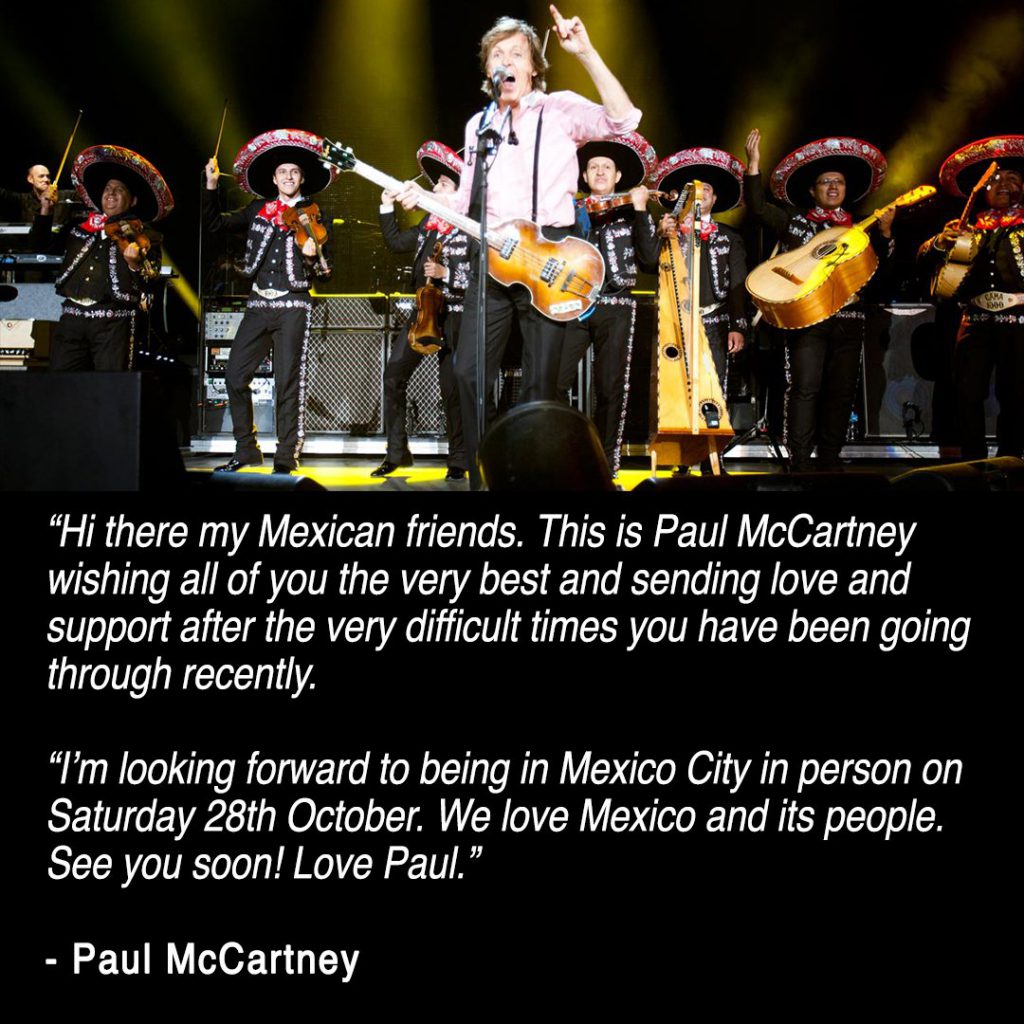 On October 27th, Paul & the band held a rehearsal.

More than 48,000 fans gathered in the city’s Azteca Stadium Saturday to hear the former Beatle in his first Mexico City concert in five years.

Before launching into “Maybe I’m amazed,” McCartney raised his fist, evoking the hand signs used to call for silence during the search for survivors in the ruins left by the September 19 earthquake.

“Fuerza Mexico!” he shouted to the roar of the crowd, delighted by his use of the Spanish phrase meaning “Be strong, Mexico!”

The 7.1 magnitude quake toppled buildings in the city, killing more than 400 people and leaving thousands homeless.

Shortly after the quake, McCartney sent a message on Twitter to Mexicans expressing his affection and support “in these difficult times.”

During his previous Mexico City concert, McCartney filled the giant plaza in the heart of the city known as the Zocalo with 200,000 fans.

On his current “One on One” tour, which began in the United States in 2016, the British legend has performed 41 shows before 1.2 million people.

During the concert, Paul did a tiny bit of The Back Seat Of My Car, singing “The lazy lights are pretty, we may end up in Mexico City” after the end of My Valentine. 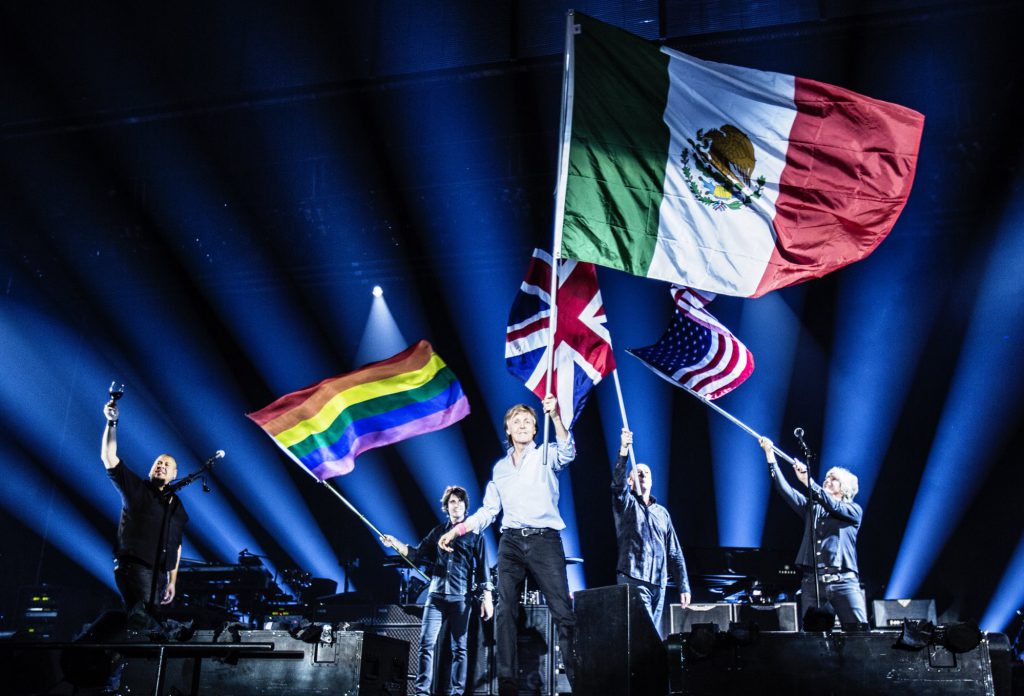 From paulmccartney.com, For Whom The Bell Tells, December 14, 2017:

“‘Fuerza Mexico!’ With his fist held high in the air, the ex-Beatle expressed the phrase that has represented the spirit of Mexico following the earthquake in September.  With this gesture and his huge songs the audience were treated to a show that spanned four decades.  Some of the audience were dressed for rain, some for sun, some in Sgt. Pepper costumes and as they all waited anxiously the one thing they knew was that Paul McCartney is a guarantee of musical magic… and so it was.” – Excelsior

Now I’m aware much of this blog has focused on the special relationship Paul has with Brazil, but I can assure you that Mexico occupies the same space in his heart. Given all the hardship the people of Mexico City have faced in recent times they were in need of some healing.

This is another country that has hosted some incredible moments for Paul, perhaps none more so memorable than his free show in Zocalo Square, the location which notably featured in the Day Of The Dead celebrations in the opening scenes to the 2015 Bond film Spectre. More than 400,000 are estimated to have seen Paul’s show there in 2012 and Paul has been eagerly looking forward to his return visit.

Speaking to a Mexican radio station, Paul declares: “It is a great pleasure to be here again. We really love you. Yes, we love Mexico. We love the Mexican people. We know the people love music. It’s a great combination.”

Tonight’s show is at the gigantic Estadio Azteca, home of the Mexican national football team and famously the venue for the “hand of God” goal by Argentina’s Diego Maradona during the 1986 World Cup Finals, controversially putting England out at the quarter final stage. Tonight of course it is the hands of a rock god which are drawing all the attention as Paul opens up with ‘A Hard Day’s Night’ and winds down, 38 songs later with ‘The End’.

The previous evening Paul shared his sadness at hearing of the death of one of his idols Fats Domino by playing ‘Ain’t That A Shame’ during rehearsals with his band, and saying “bless you Fats” to the empty stadium.  It was a very touching moment to witness. Back at the hotel that night we had a Mexican buffet dinner with Paul retelling stories of his love for Fats as we relaxed with a margarita or two (to Paul’s own special recipe).

Talking of the hotel, I never cease to be impressed by how polite Paul is to hotel staff wherever he goes. There is always a “please” and “thank you”, he always chats with them happily and there are never any airs and graces. It is palpably daunting for the staff sometimes, coming into contact with a superstar, but he always puts them at ease.

So there we have it. Another memorable leg of the ‘One On One’ tour complete.  A quarter of a million people managed to see Paul in the space of just five shows, and there will be many more to come! Next up Australia and New Zealand! 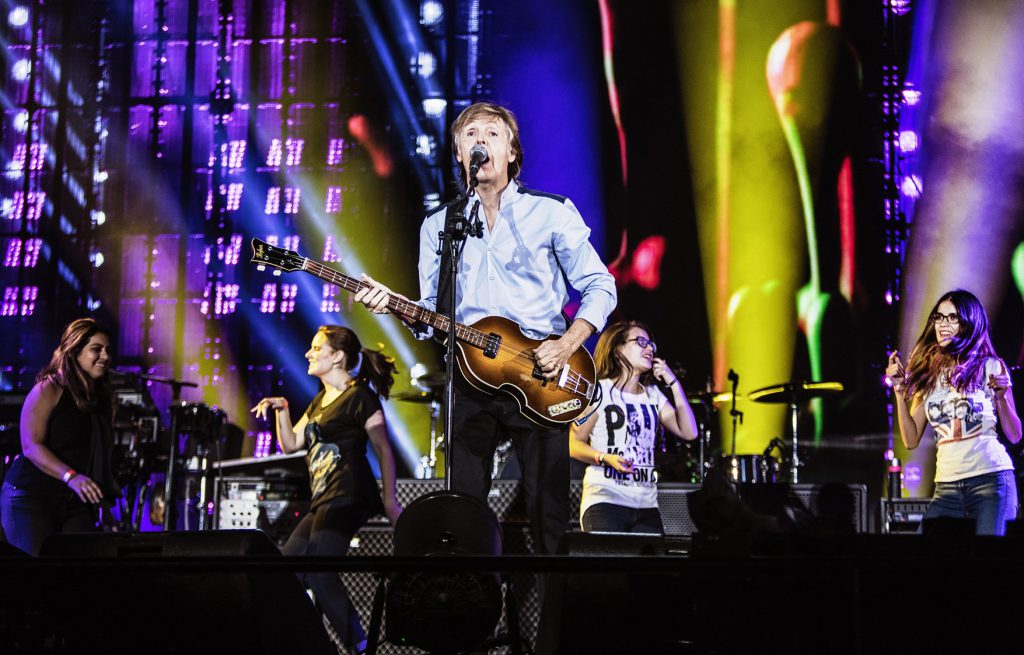 From Twitter: Memories of Mexico! #ThrowbackThursday #TBT Paul’s publicist Stuart Bell shares some of Paul’s fantastic experiences from Latin America in the latest instalment of ‘For Whom The Bell Tells’: https://www.paulmccartney.com/news-blogs/news/for-whom-the-bell-tells-one-on-one-south-america-october-2017 …

This was the 1st and only concert played at Estadio Azteca.

Paul did a tiny bit of The Back Seat Of My Car, singing "The lazy lights are pretty, we may end up in Mexico City" after the end of My Valentine