See all concerts in Brazil on the map

From paulmccartney.com, For Whom The Bell Tells, December 14, 2017:

“The day that a Beatle sang in Bahia: Paul McCartney ends his tour in Salvador with a magical sold-out concert for 53,000 people – the British icon performed a historic show”– G1

Paul is receiving a lot of praise from Brazilian media on this trip, not just for the shows but for the fact that he takes time to visit parts of the country that don’t regularly get huge artists let alone one of the biggest icons ever! This is never more obvious than his time in Salvador, the capital of the state of Bahia. Without doubt, this is the biggest concert the city has hosted and the excitement is tangible from the moment we arrived.

Poignantly, in Salvador Paul was presented with a special award for the achievement of selling over 1.5 million concert tickets since his first show here in 1990.  He has sold more tickets in Brazil than any other artist ever!  He’s broken world records, attendance records and box office records along the way too – worth mentioning that he set the highest ever attendance record too here in Salvador. Congratulations Paul! What an achievement – all is the space of 24 shows.

There were some memorable scenes in our hotel the night before the concert. The fans took over the lobby armed with acoustic guitars and commandeering the hotel piano. Somehow word had got out where we were staying and the flashmob of hundreds celebrated their hero being in town by performing classics by their idol. I’d like to give a special shout out to fans Victor, Rafael, Gabriel, Daniel and Joāo who kindly passed on some footage to our crew.

And for the show itself…many of the fans still on the morning of the show could not believe it was actually going to happen. Fans had been securing their place in the line from the day before, braving the incessant rain that fell throughout the night. “The rain even threatened to take away the brightness of Paul McCartney’s time in Salvador. But, nothing was capable of doing that.  Nothing could discourage the passion of the fans.” reported Correio newspaper the day after the show.

Once again, during the show, we saw the epic scenes of fans lighting up the stadium with their cellphones – an incredible sight to behold.  Paul had promised a party to Brazil on this trip…  and man did he deliver on this!

Paul has a post-show routine which we all love and tonight is no different in the beautiful city of Salvador (which was Brazil’s first capital and is now a UNESCO World Heritage Site). As he comes off stage, he runs to the tour bus and his team – including me, the tour director, the accountant, the sound and light team, ticketing team, travel team and many more of us line up to cheer him on to the coach. And so, at the Itaipava Arena Fonte Nova we do just that and he gives us all a high-five before jumping on board to be given a police escort from the venue. 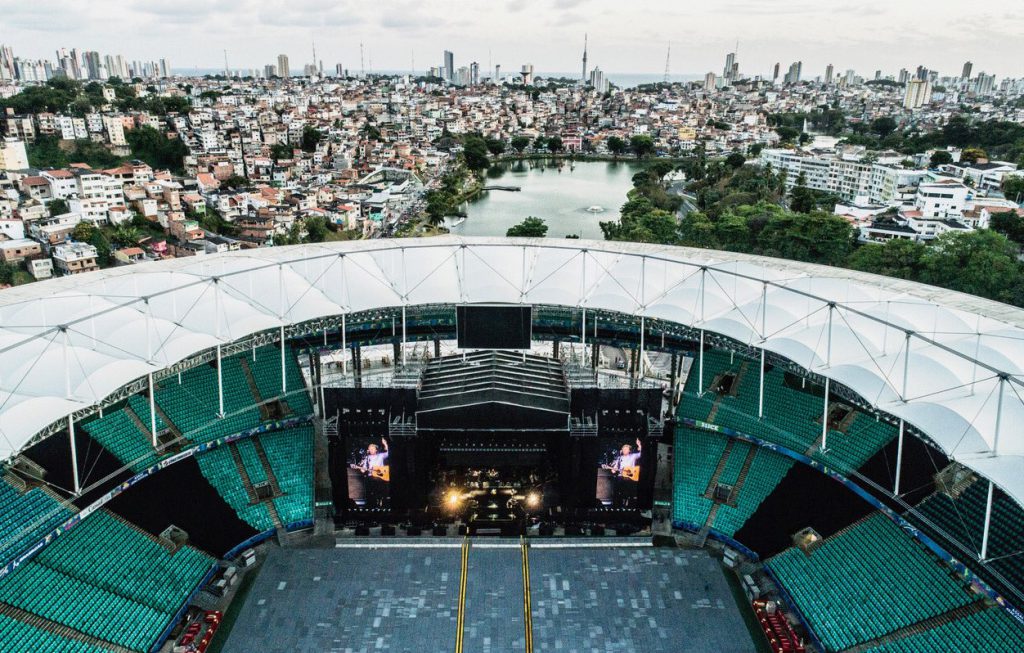 From Twitter – Final show in Brazil… for now ?? #oneonone

This was the 1st and only concert played at Itaipava Arena Fonte Nova.