As the lights dimmed and the famous crescendo of “A Day in the Life” drowned out the music in Nassau Veterans Memorial Coliseum, so began a massive trip down memory lane for thousands of Paul McCartney and Beatles fans.

The polished set on Tuesday night was the first of two nights of his Long Island stop on the One on One tour. Sir Paul started strong with early classics like “A Hard Day’s Night,” “Can’t Buy Me Love” and “All my Loving.” As a 20-year-old, these songs are close to home as they were some of the first Beatle songs introduced to me by my father on 1, the compilation that album that largely began my generation’s fandom.

As I pulled through the catalog of my memories old and new of his work, Paul too brought an eclectic palette of his work to the tour set list, digging back as a far back The Quarrymen years that pre-dated the Beatles. To have the daunting task of selecting 39 songs from a seemingly endless back catalog looked easy as he ran through songs like “Lovely Valentine” and “You Won’t See Me.”

Along with bringing a vast arrangement of tracks, McCartney also gave historical briefs between songs about certain parts of his career such as his early recording days with The Beatles. At times the stellar stage set up would reflect parts of his career, such as the stage model setup like the location where he originally recorded demos with the Quarrymen.

As Paul played “Maybe I’m Amazed,” I looked to the left to see to my father silently teeming with joy as McCartney famously sang his many screams on the track. I watched a past generation give a standing ovation to the famed Beatle nearly every time he breathed on stage, through some cheesy banter and sincerely witty jokes. It showed how much the memories made around his music resonated with fans.

In the coming songs, I would have my own moment with this when McCartney sang “Eleanor Rigby.” The vivid memories such as pouring over the moodiness of the song as a tween or figuring out the difference between mono and stereo by ear because of the recording shot back to me as I watched that same man perform the song on stage as he did when it was originally recorded in 1966.

Standing in the crowd, it seemed as if there was a large love affair between the crowd and McCartney, as my father put it. The rocker encapsulated the crowd through the psychedelia of “The Benefit of Mr. Kite,” the heartfelt rendition of “Something” and the compilation of “A Day in the Life” and “Give Peace a Chance.”

As the set wound down to its final songs, McCartney showed he can play songs such as “Back in the USSR,” “Band on the Run” and “Let it Be” with the same passion he always has. The fiery nature of “Live and Let Die” literally showed through a grand pyrotechnic display throughout the song.

And a high-caliber concert at the coliseum wouldn’t be complete without none other than Billy Joel, who McCartney brought out to play “Get Back” and “Birthday” on stage during the encore. The concert ended beautiful, respectfully ending with “Golden Slumbers,” “Carry That Weight” and, of course, “The End.”

As Rob Sheffield puts it in his book, “Dreaming the Beatles,” the music of The Beatles, and the music of Paul McCartney as well, is contextualized in very different ways between different fans. No two people experience their catalog differently. I have vivid memories of singing early Beatles songs like “Boys” with my father and purposely messing up the lyrics to “Hey Jude” every time we sang it.

On this Tuesday night, my story with The Beatles came full circle, as it did with thousands of other fans in the stadium. A One on One, you might say.

For the first of two shows at the Nassau Coliseum in Uniondale, New York, Paul McCartney called upon Nassau County-native Billy Joel for a little help.

The pair have crossed performance paths before, most memorably during Billy Joel’s 2008 concerts at New York’s Shea Stadium before its demolishment. Joel invited McCartney to perform with him; he initially turned down the gig because of a presumed scheduling conflict, but McCartney ended up surprising Joel onstage and performed “I Saw Her Standing There.” 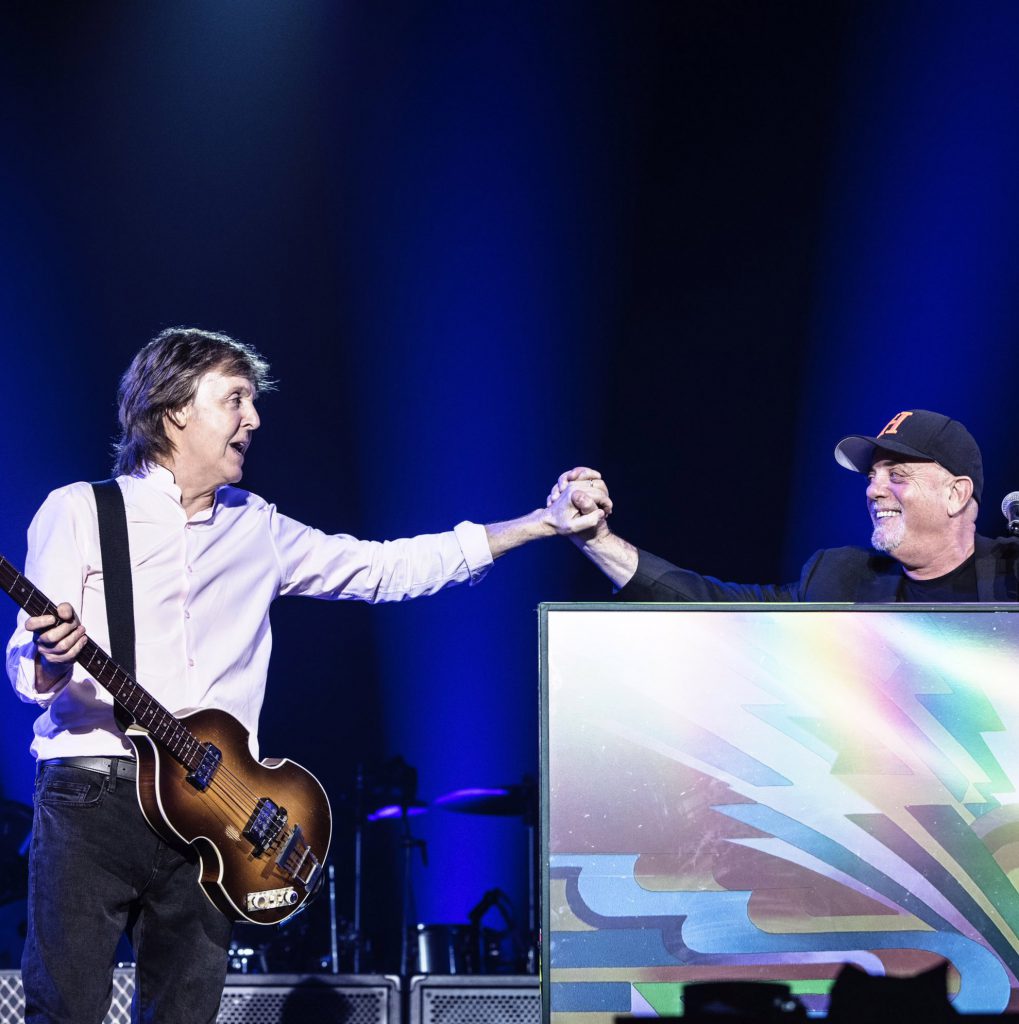 From Twitter – Rockin’ with the Magic Piano Man @billyjoel #OneOnOne 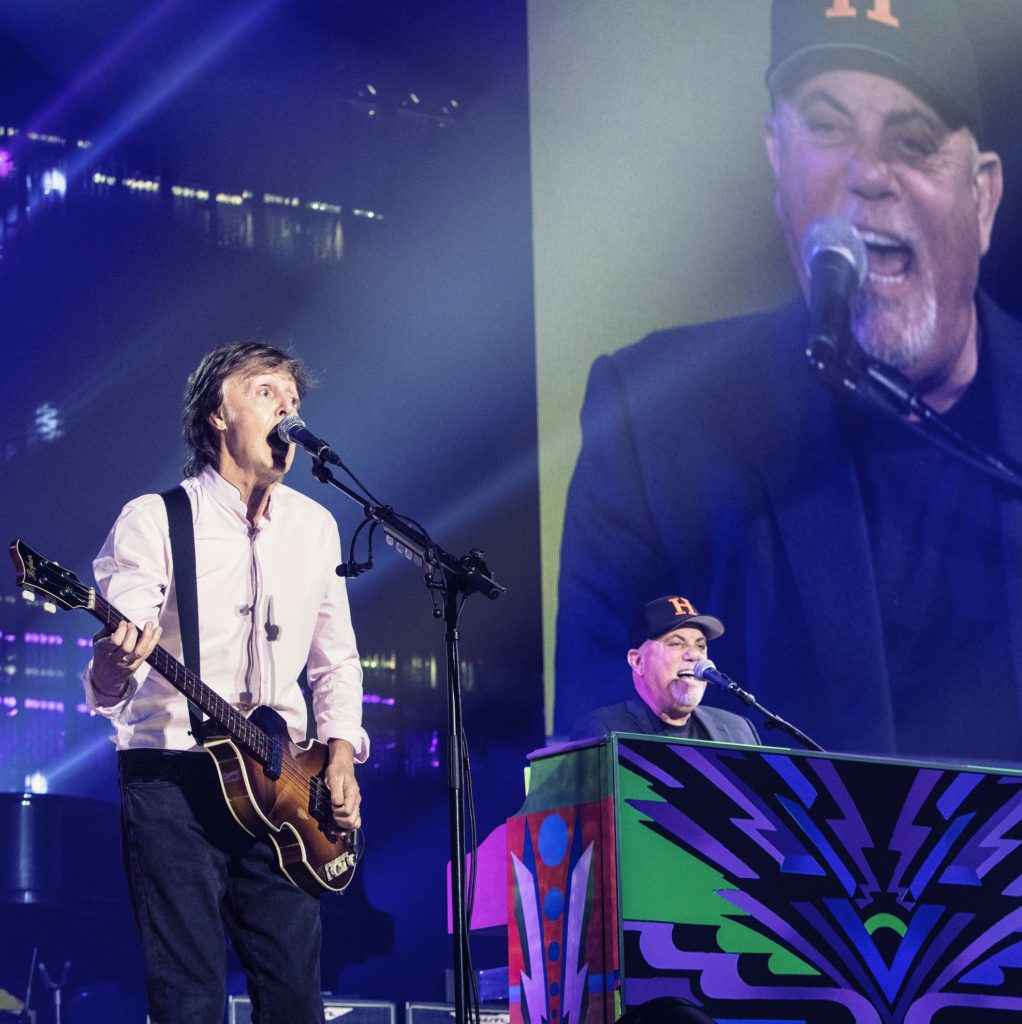 From Twitter – Rockin’ with the Magic Piano Man @billyjoel #OneOnOne

This was the 1st concert played at Coliseum.