There was a great rock ‘n’ roll show in Lincoln Monday night. It came from a legend, 50 years after he and his old band took over the world.

That legend, of course, is Paul McCartney. The show was at a packed Pinnacle Bank Arena. None of the more than 12,000 people who were there are likely to ever forget it.

Packing 39 songs into 2 hours 50 minutes, McCartney delivered the expected mix of Beatles hits and favorites from his solo career. But the show was far from a nostalgia affair. It was a fresh, vital and surprisingly loud rock ‘n’ roll show from start to finish.

That is a tribute to McCartney, who at 72 is freaky good, still able to hit all the high notes on “I Saw Her Standing There,” which came at the end of the first encore, and playing — and I mean really playing — bass, piano, electric and acoustic 6- and 12-string guitars and a ukulele. […]

McCartney unquestionably knew where he was Monday. Two songs in, he broke out a “Go Big Red.” A few songs later, he led the audience in the “Husker Power” chant. Coming out for the first encore, he stepped to the microphone and said, “There is no place like Nebraska.” Amusingly, after “Helter Skelter” in the second encore, he praised the crowd with “Nebraska Nice.” It all seemed genuine, not pandering, and McCartney and the band seemed to be having a great time playing for the enthused audience. […] 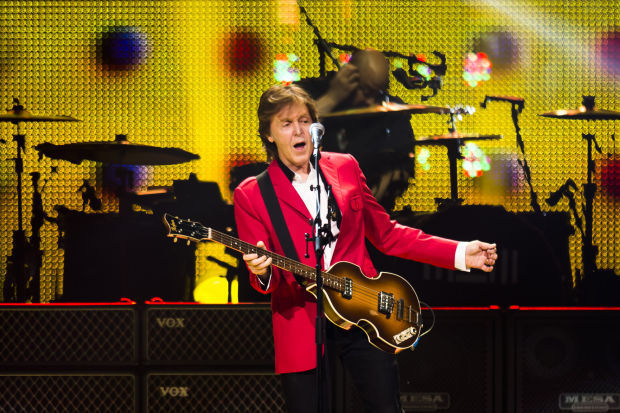 This was the 1st and only concert played at Pinnacle Bank Arena.