Frank Sinatra struggled to fill arenas in his 70s. Michael Jackson is gone. Aretha Franklin won’t get on a plane to tour. “Shadows in the Night” is the title of Bob Dylan’s latest album but it might as well describe some of his recent performances. The Rolling Stones play the occasional exhilarating stadium show, but 50 years later, we can say it: they aren’t the Beatles. In 2016, we’ve been losing legends by the day: of the giants of 20th century music, of music as we know it, there’s only one person who still stands this tall.

McCartney, the cute one, still the most bright-eyed and boyish—even though George Harrison, the quiet one, was younger all those years ago—played a miraculous concert at the Moda Center on Friday with his four-piece band. He did the Beatles. He did Wings. He even did a tune from the Quarrymen, Paul, George and John Lennon’s earlier group. All of it was joyous, exuberant, a gift from one of the world’s greatest songwriters to the fans who have followed him for decades. (A gift that cost $250 or more for the better seats, but what, you were going to buy a new phone this week?)

Calling a McCartney gig a concert is like calling “Star Wars: The Force Awakens” a movie. The legacy, the nostalgia, the expectations—McCartney understands all of it. His “One on One” show rolled out the expected lighting rigs and video screens, but the real stagecraft was his storytelling: he touched on playing ukulele with Harrison, meeting Russian officials who learned English from Beatles songs, being nervous in the studio recording “Love Me Do” with late producer George Martin, and penning “Blackbird” to support the 1960s civil rights movement. These moments from rock history were funny and humble—or as humble as one can be about, say, Jimi Hendrix learning your new song in two days, as the guitar god did for “Sgt. Pepper’s Lonely Hearts Club Band” upon its release. On Friday, McCartney returned the tribute with an instrumental jam through “Foxy Lady,” taking his major guitar solo for the evening.

The set list, matching up with Wednesday’s Fresno tour debut, felt erratic at first, swerving from “A Hard Day’s Night” to recent track “Save Us” and back to the Beatles with “Can’t Buy Me Love.” McCartney’s voice, once unblemished gold, has aged into something sometimes more coppery. But the show settled in, reaching a lovely peak when McCartney, alone on a platform that rose above the crowd, delivered acoustic renditions of “Blackbird” and “Here Today.” “Fool on the Hill” and “Being for the Benefit of Mr. Kite!” explored colorful psychedelia; a cover of Harrison’s “Something” shifted from uke-only to a fantastic full-band.

And McCartney entered the 2010s like a relevant Millennial by singing his latest collaboration, “FourFiveSeconds”—taking the vocal place of Rihanna and Kanye West, which meant hearing a Beatle sing “Hold me back, I’m ’bout to spaz” with a lyric video running behind him. Not to avoid the full arena experience, James Bond theme “Live and Let Die” included blasting pyrotechnics, sprays of lasers and climactic fireworks that left McCartney clutching his ears in mock irritation. His crowd work saw its wittiest improvisation when he invited a sign-holding couple on stage for a marriage proposal—the musician had to convince the giddy groom to take a knee. […] 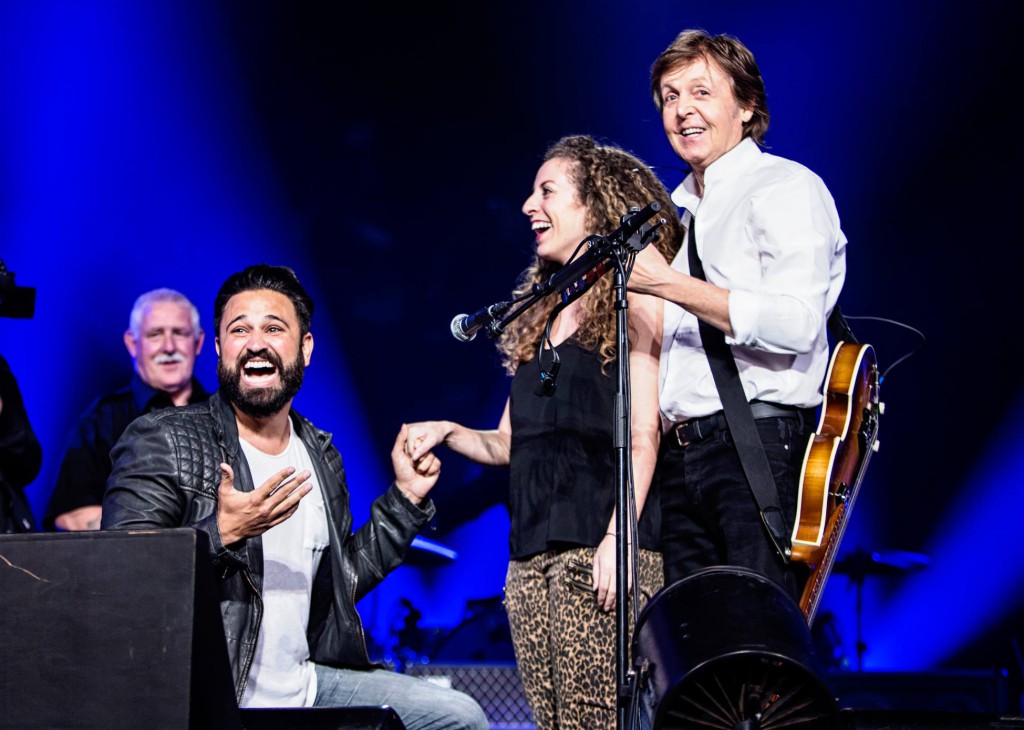 From Twitter: Portland! So good to be back! And congratulations Brian and Emily! #oneonone

This was the 1st and only concert played at Moda Center.